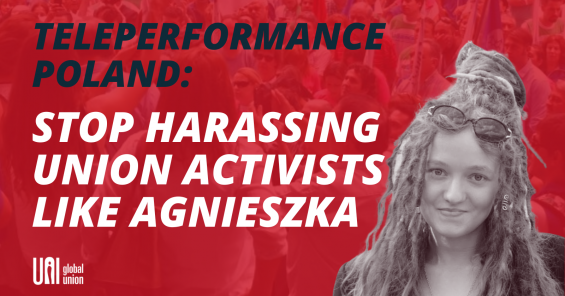 Workers, trade unionists and members of parliament took action outside the Teleperformance offices in Warsaw on 19 July, in opposition to union busting at the Polish arm of the world’s biggest contact centre company.

Protesters from Polish trade union, Stronger Together in Teleperformance, which is affiliated to UNI Global Union through the NSZZ ‘Solidarność’ federation, alongside two MPs – Agnieszka Dziemianowicz-Bąk and Maciej Konieczny – gathered in solidarity with the union’s Vice-President, Agnieszka Paterak, who has been targeted by the company.

Protected in her position under Polish labour law, this has not stopped Teleperformance Poland doing everything in its power to undermine the union leader even though the harassment and discrimination of trade union leaders is also illegal.

Agnieszka is one of 55 people on her account, where she was employed to work remotely, as do all the other staff servicing the multinational company. However, last month she was singled out and told she could no longer work from home and that her new workplace was now the call centre offices in Warsaw.

Agnieszka lives 300km away from the capital with her parents. She earns 2,700 PLN (US$570) net a month while the average rent in Warsaw costs around 2000 PLN (US$421) a month. Now that she has moved to the capital, she is desperate as she struggles to make ends meet.

“In my hand I hold a complaint to the National Labour Inspectorate describing the events that have recently happened to me and others,” said Agnieszka speaking to the press outside Teleperformance’s Warsaw offices. “The complaint will be filed today, but I hope that, thanks to you, the situation that I have been put in will end immediately, and above all, that we will come to an agreement with Teleperformance on the subject of employee demands and we finally start earning more.”

The change of working location came after the Head of the Legal Department requested a meeting with Agnieszka in June, during which she was denied the right to be represented by another union activist. Agnieszka also reports that workers on her account, and in particular her immediate entourage, have been harassed, intimidated and discouraged from continuing to work at Teleperformance by their immediate supervisors over the past weeks.

French-based contact centre multinational, Teleperformance, employs around 1,800 people in Poland with clients including Amazon and Microsoft. The union has been seeking to negotiate a pay rise since September last year but talks have ground to a halt and the company has even refused to engage with the government-appointed mediator. The union is also seeking to hold health and safety elections without interference from the company, which is a legal right.

“It seems clear by Teleperformance’s actions that Agnieszka has been singled out for her trade union activity and the company is making every attempt to force her out of her job. We urge Teleperformance Poland to respect union rights, stop targeting Agnieszka and her colleagues, and meet with the government-appointed mediator to work with the union and resolve worker issues.”