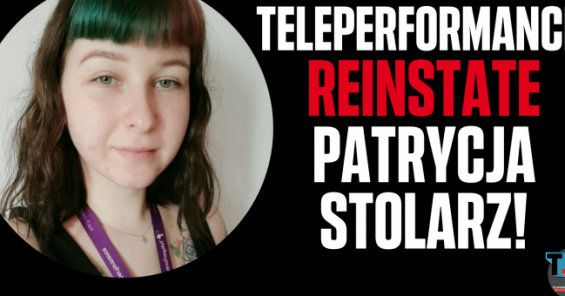 After two years working at Teleperformance’s Katowice call centre, Patrycja Stolarz wanted better communication and more transparency on the job, so she and several of her colleagues began organizing a union across the company’s Polish operations.

Stolarz, who assisted Amazon.com sellers in Germany by phone, said that when she began pushing for a union, she had some fear the company would retaliate against her for organizing, but because of her stellar performance, she did not think that the French contact centre giant would not push her out.

However, Teleperformance’s Polish management has done just that. The company unfairly terminated Stolarz’s employment and the job of another union leader, Zuzanna Hansen.

Now the Teleperformance Union Alliance is demanding that the company reinstate her and Hansen.

The Polish workers registered their union, Stronger Together in Teleperformance, part of the NSZZ “Solidarność” federation, in July with Stolarz as the treasurer. Hansen was fired after she reached out to co-workers about joining the union.

“For me, I didn’t like the way we were treated,” said Hansen, who provided tech support from Warsaw to Microsoft Denmark. “We wanted more dignity and less control by management. For example, we had to start a timer if we wanted to go to the toilet. It was suffocating and stressful. We needed a voice, and we needed protection.”

The 11-country alliance of Teleperformance labour unions, formed by UNI Global Union, believes that Teleperformance should rehire the workers immediately and take the necessary steps to ensure that union supporters are not targeted for retaliation throughout its global operations.

“In country after country, we hear Teleperformance workers talk about fear of retaliation because they want union representation,” said Christy Hoffman, General Secretary of UNI Global Union. “A union is a fundamental human right, and a company that regularly touts it is a great place to work should not be in the business of suppressing workers’ voices.”

The international support from unions around the world is heartening to the two women, who will continue standing up for better jobs at Teleperformance.

“I believe Teleperformance did this to silence me, and to scare my colleagues to not join the union,” said Stolarz. “But this fight is bigger than me. It is about what is right, and it is about all of the colleagues having a voice and having our rights respected. That is why we can’t be scared, and we must continue.”