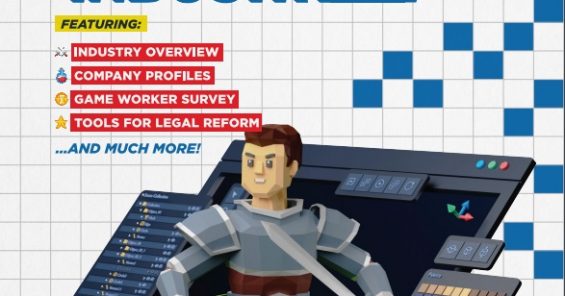 A new survey of video game workers across 29 countries by UNI Global Union confirms that low pay (66%), excessive work hours (43%), inadequate benefits (43%), and workplace discrimination and/or sexual harassment (35%), among other work-related issues, are the driving forces behind employee dissatisfaction and their desire to form a union in the workplace.

According to UNI’s new report, the vast majority of respondents (79%) expressed support or strong support for unionizing their workplace.

Low pay was the most cited issue among respondents reporting one or more workplace problems (66%.) Among those working in Europe, this rate was even higher (77%). A significant number of female and non-binary respondents reported that gender discrimination is an issue in their workplace. Nearly half of women (46%) and 43% of non-binary respondents who identified issues in their workplaces reported that gender discrimination is a problem.

“This ground-breaking report reveals global trends of recurrent employee dissatisfaction that make working in the games industry, unfair, unequal and unsustainable for many workers,” said Christy Hoffman, General Secretary of UNI Global Union. “Video games workers are coming to Berlin to deliver a strong message to the titans of the sector: it’s time to fight for our rights—we are going union.”

The findings have mobilized video game workers from across the world to unite in a global campaign to raise standards and ensure safe working hours and conditions worldwide. Representatives from video game worker union from 20 countries will meet in Berlin on June 16 and 17 to discuss international efforts to organize and strengthen worker power in the growing digital entertainment sector.

“There’s no doubt that video game industry workers want change. As we have just witnessed at Activision Blizzard, sustainable worker power only comes when workers join together to organize a union, said Sara Steffens, Secretary Treasurer, Communications Workers of America (CWA). “Workers in this sector are transforming the industry by sticking together and fighting for what’s right.”

The video game sector is one of the fastest-growing entertainment industries, with revenue approaching half a trillion dollars globally by 2028 – exceeding projected revenue for the global film and video industry. Video game companies have become massive employers, with a workforce of more than 330,000 workers across North America, Europe, and Asia, including in emerging video game markets such as India. Video game workers have spoken out in recent years against working conditions in the industry, including low pay, insufficient benefits, rampant use of mandatory overtime or “crunch,” and workplace cultures rife with harassment and discrimination.

Workers have also begun to form and join unions, including at Nexon and Smilegate in South Korea, Paradox Interactive in Sweden, Ubisoft studios in France, and, most recently, Activision Blizzard’s Raven Software in the U.S.

This report was commissioned by UNI Global Union to serve as a tool for workers and their unions to understand the landscape of the video game industry and the experience of game workers, as well as opportunities for legal and regulatory reform to improve workers’ working conditions and bargaining power.

Representing more than 20 million workers in 150 countries, UNI Global Union and UNI Europa are driven by the responsibility to ensure skills and service jobs are decent jobs and that workers’ rights are protected, including the right of union representation and collective bargaining.