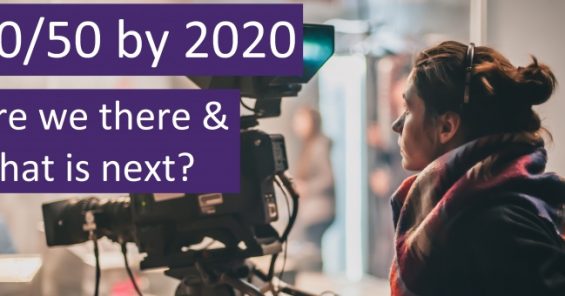 On Friday 11 December 2020, UNI MEI co-organised with the EWA network (European Women’s Audiovisual Network) in partnership with EFAD (European Film Agency Directors Association) and Cineuropa an online event entitled ‘50/50 by 2020 – Are we there & what is next? Perspectives for gender equality in the European Audiovisual sector’.

Attended by over 100 participants from across Europe and beyond, the online event highlighted the progress achieved in the last years in the European audiovisual sector regarding gender equality – progress that was considerably driven by the campaign ‘50/50 by 2020’ launched by the Swedish Film Institute at the Cannes Film Festival in 2016 – but also the important gaps still to be corrected in the coming years. For this purpose, new priorities, strategies, and tools were discussed, as well as the importance of maintaining the 50/50 target as long as it has not been fulfilled.

After an introduction by Ms. Graça Fonseca, Minister of Culture of Portugal, with testimonies from film professionals from across Europe, and in the presence of key sector stakeholders – professional associations, film funding bodies, audiovisual regulators and the European Commission – the exchanges were rich, and contributors agreed they had to be repeated regularly at European level to keep monitoring progress and maintain the equality target on the sector’s agenda.

The recording of the event as well as a detailed report of the discussions are available online on the Cineuropa website.