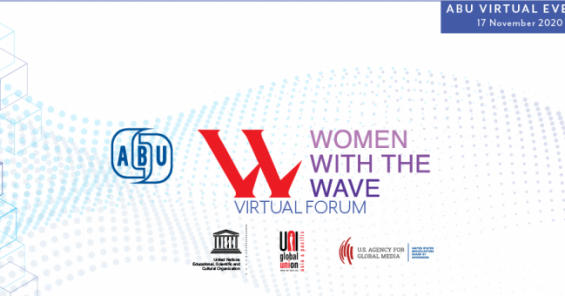 On Tuesday 17 November the Asia-Pacific Broadcasting Union (ABU) organised, in parallel to its 57th General Assembly, the ‘Women With the Wave Forum – Broadcasting For All:  Diversity and Inclusion in the Media’.

In its 9th year, this year’s virtual event involved panellists from a wide range of countries, across continents. During the event, the ongoing progress of gender equality and diversity in the media was reported and discussed, so that ABU members could take note of the latest developments and activities, and be motivated to embrace this important area of media workplace and content practice, to better serve and reflect communities and societies.

Like was the case last year, during the physical meeting in Tokyo in November 2019, UNI MEI contributed to the event and presented the work done by unions across the world to promote gender equality on and off screens and prevent violence and harassment in workplaces. The ‘Good Practice Hanbook for gender equality and diversity in the European Audiovisual sector’ developed by the European social partners in the context of the EU social dialogue was highlighted as a useful tool and inspiration for actions in other regions of the world.