A national strike in Colombia for police reform, democracy, and labour rights 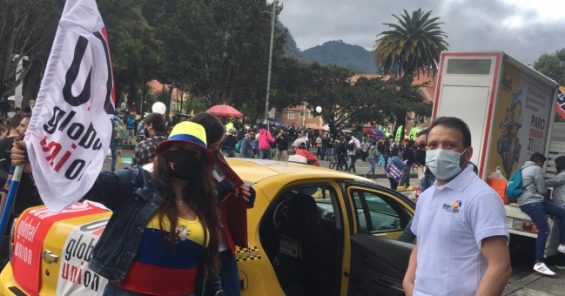 On 19 November in Colombia, unions and activists are participating in a nation-wide strike to demand reforms that will end ongoing violence and support democracy. The strikers are calling “for life, democracy and the negotiation of the emergency plan.”

They want the government, led by President Iván Duque, to raise the minimum wage, reform the national police, and stop Decree 1174 and Bill 010 that undermine workers’ rights.

The changes are direly needed. According to the Institute of Studies for Development and Peace (INDEPAZ), 1,052 social leaders and human rights defenders have been assassinated since the signing of the peace agreement in 2016, 642 social leaders since August 2018, and 252 people in 2020 alone.

The government of Iván Duque has failed to comply with the peace process, increasing militarization and peasant repression. The Duque administration has even used the military to restrain civilian authorities legitimately elected by popular vote as happened in Bogotá. This latest day of action was partly sparked by the brutal police killing in September of Javier Ordoñez, a father of two, also in the capital. This outrage has drawn further attention to the widespread excesses committed against peaceful and legitimate protesters.

UNI Americas supports its affiliates who are joining this peaceful day of struggle in defence of human rights and for a social agenda that transforms the country.