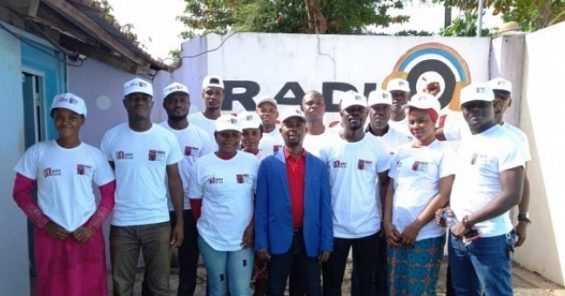 Thanks to the funding and support of the UNI Organizing Fund, UNI MEI, has been working with the National Union of Media Professionals of Côte d’Ivoire, SYNAPPCI, to build organizing capacity and carry out a three-year campaign in the radio sector. The training and strategic planning during the first phase of the  project led to a campaign targeting community radio stations in the country’s capital Abidjan and its region. The aim of the campaign was to gain recognition for the union, to increase their resources, and to organize the workforce in this sub-sector.

Throughout the first two years, the union reached out to workers in each community radio in the Abidjan region, visited each radio station to identify activists, followed by a series of training sessions for activists.

In 2020, the third year of the project, SYNAPPCI implemented a series of organizing campaign activities together with the activists in the different community radio stations through which they have been able to identify new leaders and recruit new members.  As a result, the membership of the union increased significantly, and the union has now established a good presence across the different community radio stations. While this success gives workers in the community a greater voice, the new and growing union structures are also an important element for a pluralistic, diverse and inclusive local media ecosystem that is so vital for democracy.

We applaud the commitment and hard work of the SYNAPPCI leadership and of all activists that have succeeded in growing a stronger voice for workers in the community radio stations. UNI MEI is looking forward to continue working with the union to realise the three key objectives for future activities that SYNAPPCI has identified at the end of the project:

3) to establish a society for the collective management of authors’ rights of journalists and media workers, in response to reducing revenue and the impacts of the pandemic.

To learn more about the activities of SYNAPPCI, go to: www.facebook.com/synappci