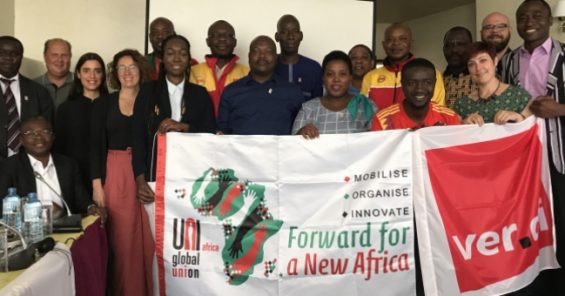 UNI Global Union is giving a Breaking Through Award to UNI Post&Logistics’ DHL Alliance. Since 2019, the alliance, which represents 26 countries and over 3,637 workers in Africa, has built worker power through organizing and growing unions.

In less than three years, the network grew from 4 to 28 unions, and now covers more than half of the countries of Africa. The alliance has grown with support from UNI Post&Logistics and SCORE.

Comrade Benson Ogbeide, Deputy Presdent of NUPTE, Chairman of DHL section in Nigeria and a DHL worker, welcomed the award on behalf of the alliance and looked forward to more organizing breakthroughs in the future.

“This is a huge honour and we want to thank UNI for the recognition,” said Ogbeide. “Since our inaugural meeting in Kenya, where we talked about collective bargaining and organizing, we’ve had an edge. It’s helped us to go above and beyond and do more. We’ve been able to recruit more and more members and we thank UNI for the role they’ve played in this.”

UNI General Secretary Christy Hoffman said, “This alliance brings together workers from an unprecedented number of African countries to build power, and it serves as an inspiration to unions all over the world organizing at other multinational companies.”

“The network has acted as a springboard for organizing, but also enabled sharing best practices in the fields of campaigning and negotiating.”

The Breaking Through Award recognizes outstanding organizing efforts. Other winners this year are the Writers Guild of America East, Finansforbundet Denmark and Finance Sector Union of Australia.