Amazon Strikers in Italy: “From Piacenza to Alabama—One Big Union” 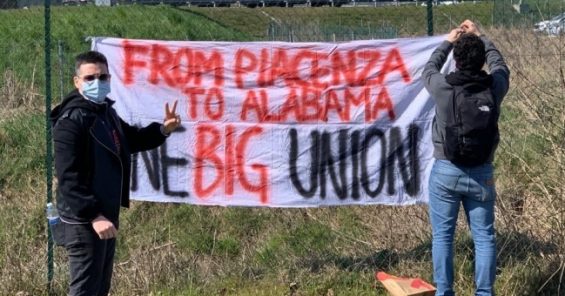 Amazon workers in Italy went on strike today to tell the tech giant “enough is enough” and to demand an end to the inhumane and suffocating work pace in their warehouses.

“Today is a very important day,” says Tania Scacchetti Confederal Secretary of CGIL. “The workers of the Amazon supply chain have decided to protest to demand a normal system of labour relations and send an important message about the need to talk about quality work [conditions].”

The strike endorsed by FILT CGIL, FIT CISL and UILTrasporti is the first national strike of the Amazon supply chain workers in Italy, and it follows multiple work actions that have taken place during the pandemic in  Amazon warehouses in Germany, Spain, France and Italy.

“Once again, workers are forced to act to make Amazon understand that they are not robots,” said Christy Hoffman, General Secretary of UNI Global Union. “In Italy, Germany, Spain and in Bessemer, Alabama, and elsewhere, Amazon workers are demanding conditions that respect their dignity as human beings and jobs that do not put their safety at risk.”

According to CGIL, the workers were left without other options after negotiations for the second level bargaining of the Amazon´s supply chain in Italy ended after the company refused to set another date..

“Despite the sky-high turnover, Amazon does not intend to pay more attention to the conditions of over 5,000 workers in Lombardy. The workers are exhausted. During the months of the pandemic, they guaranteed a fundamental and continuous service, even in risky conditions. With the further aggravating circumstance, for the employees, of having to guarantee maximum flexibility at work, often without the correct equality of economic treatment and constantly placed under threat of not having renewed the contract,” said in a joint statement, Cgil, Cisl, Uil, Filt, Fit, Uiltrasporti, Felsa, Nidil, Uiltemp, from Lombardy.

“Amazon’s unacceptable behaviour demonstrates its chronic unwillingness to engage in dialogue with trade unions and establish a fair and transparent system of industrial relationship,” the Italian unions said.