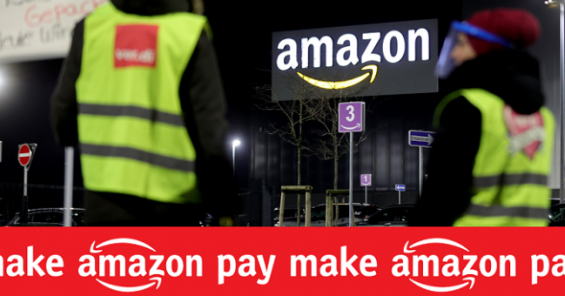 As scrutiny over Amazon’s anti-union practices, environmental impact, tax avoidance and worker safety intensifies in Europe and the United States, UNI Global Union, Progressive International, Oxfam, Greenpeace and dozens of civil society organizations, environmentalists and tax watchdogs are joining forces on Black Friday to #MakeAmazonPay. Endorsed by Noam Chomsky, Cornel West and other notable activists, workers and supporters around the world will embark on a day of action with protests and strikes to demand that Amazon pays its workers fairly and respects their right to join unions, pays its fair share of taxes and commits to real environmental sustainability.

Actions will be taking place across Amazon’s global empire and into its supply chain in countries including: Brazil, Mexico, US, UK, Spain, France, Belgium, Germany, Luxembourg, Italy, Poland, India, Bangladesh, the Philippines, and Australia.

“During the Covid-19 pandemic, Amazon became a trillion dollar corporation, with Bezos becoming the first person in history to amass $200 billion in personal wealth. Meanwhile, Amazon warehouse workers risked their lives as essential workers, and only briefly received an increase in pay. As Amazon’s corporate empire expands, so too has its carbon footprint, which is larger than two thirds of all countries in the world. Amazon’s growing delivery and cloud computer businesses are accelerating global climate breakdown. Like all major corporations, Amazon’s success would be impossible without the public institutions that citizens built together over generations. But instead of giving back to the societies that helped it grow, the corporation starves them of tax revenue through its world beating efforts at tax dodging. In 2019, Amazon paid just 1.2% tax in the US, the country it is headquartered in, up from 0% the two previous years,” read the Common Demands submitted to Amazon and signed organization such as UNI Global Union, Progressive International, Oxfam, 350.org, Greenpeace, Tax Justice Network and others.

Members of the public can add their name to these Common Demands, donate to an Amazon workers’ strike fund, and join the campaign at www.MakeAmazonPay.com.

“We already know about the grueling working conditions, unrealistic productivity targets, surveillance, bogus self-employment and a refusal to recognize or engage with unions unless forced,” said Christy Hoffman General Secretary of UNI Global Union. “Amazon is a clear and present danger for our societies. But no one alone can win on the many fronts where Amazon is problematic—not only workers rights, but digital surveillance, tax avoidance, climate change, fair markets… Now is the time to come together as a global movement to make Amazon pay. Amazon must change. We can unite and win. I know this because we’ve done it before. When we come together in our unions, in our communities with our elected officials we can be more powerful than we can imagine.”

“Trillion-dollar corporations like Amazon have too much power and are too large for a single government, trade union or organisation to reign in,” said Casper Gelderblom, Progressive International’s campaign lead. from Progressive International. “That’s why workers, citizens and activists are coming together across borders and issues to take the power back. What we’re seeing today is progressive internationalism in action and it’s only the start. We will make Amazon pay and spur on a new era of action to reset the balance between the people and the powerful.”

“The1.5trillion dollar corporation that is Amazon is only so because of a failed system that pushes short-term consumerism to the max, stresses out our planet and fuels inequality. While Bezos’ polluting billions stack up, Amazon warehouse workers take big risks with little reward. With a carbon footprint already larger than manycountries, Greenpeace stands in solidarity with all who are fighting to reign in Amazon’s excessive power and unjust climate-wrecking practices,” said Jennifer Morgan, Executive Director of Greenpeace International.”

“Amazon has built its business on undermining the smaller, local businesses on which our jobs and communities depend – while using its lobbying power to bend laws in its favour,” said Alex Cobham, Executive Director Tax Justice Network.“Rather than saving anyone money, Amazon free-rides on the backs of taxpayers, using tax havens to escape paying their fair tax contribution for the roads, the markets and the educated and healthy workers that they rely on to generate their billions in profits.The bare minimum that governments should be doing today is to implement excess profits taxes, to reclaim the entirely unearned windfall that Amazon has extracted from public health lockdowns around the world.”