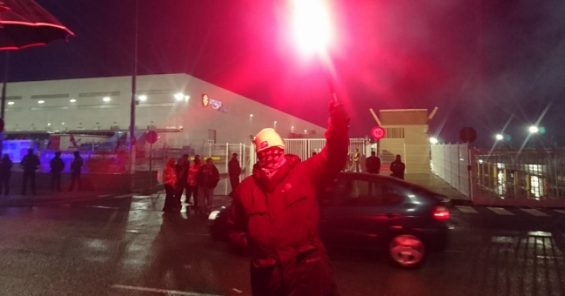 Amazon workers launch wave of Black Friday strikes and protests: “Next-day delivery should not mean a lifetime of pain for Amazon workers.”

Unions in Germany, Italy, Spain, and the United Kingdom expect thousands of workers to demonstrate outside of Amazon’s “fulfilment centres” during the busiest online shopping days of the year.

“Amazon’s refusal to negotiate with unions is not only a violation of workers’ rights, it is dangerous. By not addressing workers concerns, hazards remain, and the injuries continue,” said Christy Hoffman, General Secretary of UNI Global Union. “Next-day delivery should not mean a lifetime of pain for Amazon workers.”

The labour rights actions are taking place in at least nine facilities:

• Germany: Amazon workers, members of ver.di, walked off the job this morning at the Bad Hersfeld facility at 8:30 a.m.
• Italy: Italian labour union FILCAMS CGIL announced a “state of agitation” and Black Friday solidarity actions at several Amazon facilities.
• Spain: The Comisiones Obreras (CCOO) will lead a strike at Amazon’s San Fernando de Henares on November 23 and 24. The Madrid-area facility employs 1,800 workers and was last on strike during Amazon Prime Day in May.
• United Kingdom: The GMB will hold large protests outside of five Amazon warehouses in the UK. One of those “fulfilment centres,” the 1,500 worker Rugeley warehouse, was recently called “one of the most dangerous places to work in Britain.”

Amazon fosters a brutal, high-pressure work environment in which speed is valued over safety, according to warehouse employees, and the company’s demanding goals over long, gruelling shifts cause widespread injuries. For example, a GMB survey of UK workers found that 9-in-10 have pain on the job.

“I have repetitive strain, and spondylosis with arthritis,” said one Amazon worker organising with the GMB who fears retaliation. “The work is dehumanising, you are a number not a person. if you have health issues, the Amazon way is to pay you off and replace you with temporary workers with less terms and conditions.

Elsewhere, chronic pain is too common. “I’ve seen too many people starting healthy and now having their second or third surgery already,” said Andreja Schmidtkunz, a German Amazon worker and ver.di member. “You start at the company healthy and leave it as a broken human.”

“Amazon has not made worker safety a top priority,” said Fiorenzo Molinari, the local FILCAMS CGIL secretary in Piacenza. “To us, it seems like the company only pretends to care. Our warnings about unsafe conditions often go ignored, and our concerns about our jobs get deflected.”
The company has a notorious record of suppressing union rights. Amazon generally has refused to negotiate collective bargaining agreements with unions.

Amazon reportedly called the Spanish National Police to break the strike in San Fernando de Henares. The company’s request was denied, as labour relations does not fall within the police’s purview and Spanish legislation protects the right to strike.

When asked about the reasons why he is striking, Spanish Amazon worker Kevin Douglas who is organising with the CCOO spoke about the toll long hours has on his family life, “I’ve been working long hours, getting home late, tired, and under a lot of stress. We do morning shifts, then evening and night shifts. Now we have to work six days in a row, but the company now wants to make that seven. At least some of us used to have one day off a week. Most of my friends and family work from Monday to Friday, so I never get to spend time with them.”

The strikes could affect delivery across Europe in key countries. After the United States, Germany and the United Kingdom are Amazon’s second and third biggest markets, respectively.

The one-million-member CCOO is the largest union in Spain and represents a wide cross-section of sectors.
Filcams Cgil represents workers in the Italian retail and services sector.

The GMB is a general union representing nearly 600,000 members in the UK. Over the past several years, it has been a driving force for improving conditions for workers in the gig economy.

ver.di represents more than two million service workers in Germany, and the union has been helping the approximately 16,000 employees Amazon workers organise since 2013 for a collective agreement.