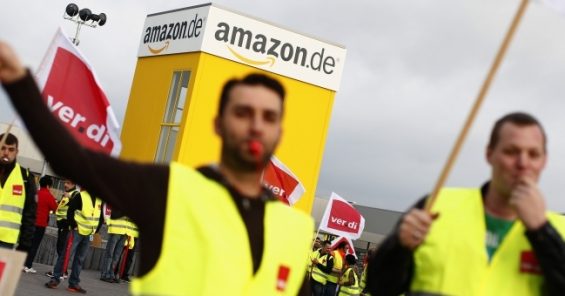 Barely a week after workers in Italy launched a successful national strike at Amazon facilities across the transalpine country, members of the German union ver.di are responding with a 4-day strike in 6 cities: Rheinberg, Werne, Koblenz, Bad Hersfeld, and Leipzigin in what is a long-running struggle for better pay, working conditions, and respect.

“Due to the closure of large parts of the brick-and-mortar retail sector in the Corona crisis, Amazon’s order volume has gone through the roof. The workers have paid the price,” said Orhan Akman, who is responsible for the retail and mail order sector at the union ver.di. “[I]t is difficult to maintain social distances, and other measures to prevent contagion are almost impossible.” Since April 2013, Amazon has faced worker unrest in multiple countries, particularly in Europe, where workers in Spain, Germany, France, and Italy have walked out over a dozen times. The protests have intensified during the pandemic as Amazon failed to listen to workers’ demands to make their workplace safer.  In the UK, workers raised concerns about the company becoming a “hive of infection”during Prime Day because of its failings. In the United States,  where more than 20,000 Amazon workers have been infected, workers have struck as well.

The company’s inadequate response to COVID and refusal to pay workers what they deserve, is part of a broader anti-employee pattern at the tech giant.

Last month,the UNI Global Union Amazon Alliance called on the tech and commerce giant to stop its dishonest anti-union campaign and allow workers to vote for a union in the United States without the aggressive and constant pressure from the company to vote no.

The global labour movement is also coming together to show solidarity with Alabama warehouse workers and their high-stakes campaign to form the first Amazon union on U.S. soil.

The excitement generated by the Bessemer workers campaign to join RWDSU has prompted support and solidarity from athletes, movie stars, musicians, and even U.S. President Joe Biden.

In the financial world, and with the help of UNI Global Union, over 70 investment firms and institutional investors representing combined assets of more than US$6 trillion, submitted a letter to Amazon in February demanding that the tech giant cease “all anti-union communications, including public statements, captive audience meetings, texts, websites, on-site billboards, and any other form of contact with workers regarding their freedom of association.”

This massive—and growing—level of support can be explained because Amazon, like many other American corporations, is resisting unionization with an anti-worker campaign, full of dirty tricks like anti-union propaganda and misleading anti-union videos. The company has even rolled out intimidating captive audience meetings, where a supervisor or a “union-avoidance consultant” pushes the boundaries of the law, and the truth.