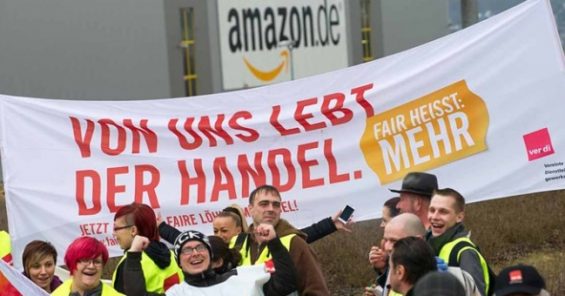 Amazon workers who are members of ver.di, the largest service worker union in Germany,  began a two-day strike today at five of the mail-order giant’s fulfilment centres. The walkout started during Monday’s morning shift and will continue into Tuesday evening.

In recent days, Amazon has tried to fend off another strike in its German operations by offering small, one-sided wage increases ranging from two to 2.7 percent—barely keeping up with inflation.

“Without the persevering strikes of recent years, there probably would not be a penny more in workers’ checks at Amazon. This is precisely what the workforce knows,” explained ver.di Federal Board member Stefanie Nutzberger. “Those who earn $ 4.5 million an hour can at the very least provide their workers with reliable incomes and legally-binding pay increases. Unilateral wage changes can be reversed tomorrow. Security only comes from a collective agreement. “

The company’s locations in Bad Hersfeld, Koblenz, Leipzig, Rheinberg and Werne. In the last week, there were work stoppages at several locations.

The union assumes that the strikes will lead to delivery delays.

While thousands of Amazon workers have joined ver.di, the company has rejected any collective bargaining agreement with its employees in Germany. The company’s hostility to unions has led to several strikes and other workplace actions across Europe over the past four years.

Last week, Amazon faced criticism after an anti-union video leaked, training managers in its Whole Foods stores on how to suppress worker organising.

“Amazon talks about being a good employer, but its anti-union actions show that the company is beyond a subprime place to work,” said Mathias Bolton, Head of UNI Commerce. “From Germany to Spain to the U.K. to the United States, Amazon’s rotten culture of high pressure and low wages must end, and the best way for the company to change is negotiating with its workforce.”

UNI Commerce, a part of UNI Global Union, works for unions rights as well as improved conditions in the retail and wholesale sector. UNI Global Union represents 20 million service workers in 150 countries and has taken the lead in coordinating the work of the Amazon Alliance of Trade Unions.