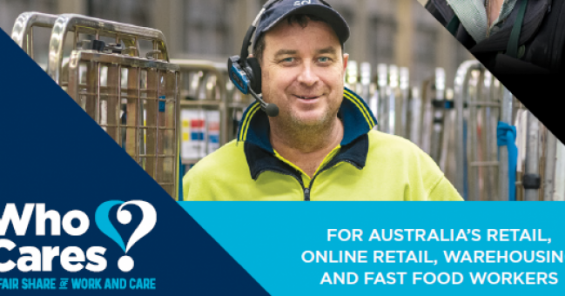 A survey of more than 6,000 members of UNI Global Union’s Australian affiliate, SDA, has unveiled the crushing consequences of precarious work and unpredictable shifts on workers in the retail, online retail, warehousing and fast-food sectors.

The study, which was commissioned by SDA and carried out by the University of New South Wales, found that essential retail workers are juggling shifts that are too short to make a living, grappling with changeable rosters, and unable to find suitable childcare they can afford. Forty-two per cent of respondents, most of whom are women and working predominantly in major supermarket chains, said their shifts caused them stress.

“As a single mother I am committed to working hard for my children. Now due to low hours of only nine hours a week, all of a sudden, I have found myself more stressed and losing sleep at night worrying about how I am going to survive. I’ve considered quitting their sports because having to take them to training and their games doesn’t suit my manager’s idea of rostering.”

Forty-one per cent of parents said their shifts can change unexpectedly, including 36% of part-time and full-time employees, while 34 per cent of all respondents strongly agreed that if their hours were more predictable, they would be able to work more.

Haphazard working hours are impacting workers’ children, causing a lifetime of disadvantage – while 95 per cent of children nationally participate in early childhood education for 15 hours a week in the year before school, this was the case for only 72 per cent of surveyed retail workers. Furthermore, parents reported facing retribution for asking for shifts that fit their family responsibilities.

“You sometimes feel like you are being taken off shifts for weeks if you ask for one shift off due to kids,” said a part-time mother of a child with a disability.

Others reported the impact of low wages: “My pay depresses and scares me; I’m always teetering on the edge of homelessness,” said one woman. Another says that she faces the painful irony of working in the supermarket, but not being able to afford food because of precarious scheduling. “When I get weeks with only a couple of shifts it’s hard to afford groceries.”

“Insecure work is a crucial issue in our region and around the world. It costs societies by imposing a considerable burden on workers through overwhelming stress and financial insecurity. And it costs business through inefficiency,” said UNI Asia and Pacific Regional Secretary, Rajendra Acharya. “I commend the SDA for commissioning this report that demonstrates the insecurity faced by essential workers and shows the actual cost of insecure work in Australia.”

“Tens of thousands of Australia’s lowest-paid are denied the opportunity of full participation in community life because they don’t know when they’ll work or if they’ll get paid enough to get through the following week,” says SDA National Secretary Gerard Dwyer. “It is not good enough. It is un-Australian. Time is overdue for a Work and Care Summit to right these wrongs.”

The SDA is calling for:

For more information on the report, follow the link: national.sda.com.au/care.