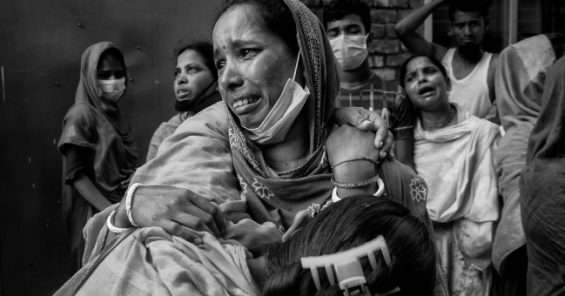 The death of at least 52 workers at the Hashem Food juice factory on the outskirts of Dhaka, Bangladesh, shows that factory safety continues to be a major issue in the country.

A fire broke out on the evening of Thursday, 8 July, in a seven-story building where fruit drinks, packing material and plastic packaging are made. An estimated 200 workers were in the building in Rupganj. At least 49 workers burned to death on the third floor. Three others died jumping from the building, and 25 workers were rescued from the roof. Relatives allege that the only exit to the factory was locked.

At least 16 children are missing. There are allegations that children as young as 11 were working in the factory.

“The combination of child labour and workers locked into an unsafe factory has led to a particularly heartbreaking and distressing result. This horrific case of industrial homicide brings home to us the barbaric conditions and complete lack of safety in some Bangladeshi factories.

“The factory owner has reportedly been arrested, and relatives will receive compensation. But the focus of the Bangladesh government on punishment and compensation will not bring back the lives that have been lost.

“So much progress has been made over the years in terms of safety in the textile and garment sector in Bangladesh thanks to the Accord on Fire and Building Safety. This must be ensured into the future through a successor legally binding agreement between the brands sourcing from Bangladesh and the trade unions.”

“Eight years after Rana Plaza, this shocking and needless tragedy shows that deadly working conditions in Bangladeshi factories persist. While huge strides have been made in garment industry safety – thanks to the Bangladesh Accord – it is a reminder that without robust and independent systems to enforce safe working conditions, the very worst can happen. A locked fire exit is a disaster waiting to happen and we cannot afford to be complacent. We must continue to push for credible and enforceable commitments from companies sourcing in Bangladesh – workers’ lives depend upon it.”

Bangladesh has a long history of fatal factory accidents, mostly in the country’s large garment sector. In November 2012, 112 workers died in the Tazreen Fashions fire after being locked into the building. In April 2013, 1,133 people were killed when the Rana Plaza factory complex collapsed.

The Bangladesh Accord on Fire and Building Safety was created soon after to create a working environment where accidents can be prevented with reasonable health and safety measures.

The Accord is an independent, legally binding agreement between fashion brands sourcing from Bangladesh and trade unions to work towards a safe garment and textile industry.

The Accord is time limited, and a successor agreement is currently being negotiated. Since 2020, safety in the sector has been coordinated by a local tripartite body, the Ready-Made Garments Sustainability Council (RSC). However, the RSC can only be successful as long as the brands are bound by their commitment to the unions through a health and safety agreement that is currently being negotiated as a successor of the Accord. The local manufacturing industry must live up to the standards established by the Accord.

Some 120 brands have signed an agreement to extend the mandate of the Accord. The collective power of the brands and the unions puts tremendous pressure on the Bangladeshi government and on local factory owners to take safety seriously.

Although the Accord only covers the garment industry, it sets an important precedent for factory safety.