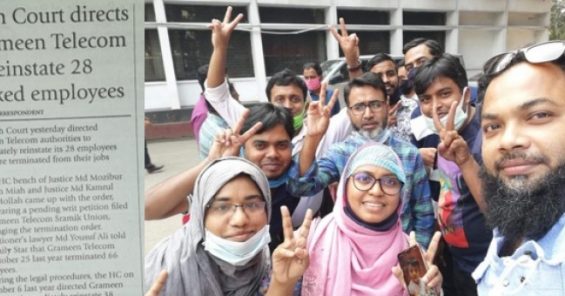 This shocking action drew immediate reaction from UNI Global which extended strong solidarity support demanding the immediate reinstatement of the union members and their leaders.

Not willing to be silent victims, 38 union members, including the union’s president, general secretary, and other union officials, banded together and launched a suit to challenge the unjust dismissal notice at the High Court Division of the Bangladesh Supreme Court.

Fortunately, the Justices of the High Court Division found in favour of the union members’ plea and ordered the company to reinstate them.

However, the company failed to comply with the order which compelled the High Court to issue an appearance notice on contempt of court grounds to Nobel Laureate Dr. Muhammad Yunus, Chairman of Grameen Telecom, and the Managing Director Ashraful Hasan, who authorised the termination, to appear before the court on 16 March.

The two top persons appeared virtually, apologising to the court, and clarified that they have re-appointed the 38 members.

Most recently, on April 4, the High Court heard arguments for the reappointment petition of another 28 employees, and similarly ruled in their favour.

With this unhappy episode almost over, more than half of those originally terminated would be reappointed, while 32 members accepted the termination and joined a sister concern at Grameen Distribution, the Grameen Telecom Sramik Karmachari Union can now look forward to rebuilding a stronger union and building back relations with the company management to better serve the Bangladeshi public relying on their services.

UNI Apro Regional Secretary Rajendra Acharya, expressed gladness at the recent news, saying, “We are proud of the Grameen Telecom Sramik Karmachari Union. Their members have expressed resilience and solidarity while maintaining their high spirits in this fight against injustice. We wish them well and hope for them all the success in the future.”