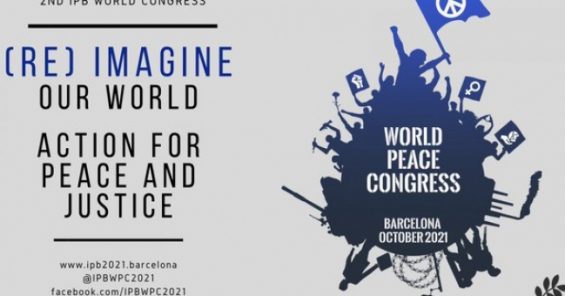 Under the title “(Re)imagine our world: Action for Peace and Justice,” participants from around 70 countries will gather in Barcelona for the Second International Peace Congress from October 15-17.

The event is spearheaded by the International Peace Bureau (IPB), a UNI partner. The organization’s Co-President Philip Jennings, who is also UNI’s former General Secretary, says that the congress aims to be the largest gathering of activists for peace in 2021, the year that the United Nations has declared the International Year of Peace and Trust.

“It’s also a big year for IPB, as we celebrate our 130th anniversary and as we approach the 40th anniversary of the Olof Palme report on common security; the time has come to develop a new blueprint for common survival,” Jennings adds.

The main goal of the congress is to invigorate international peace work, offer a meeting point for different actors, redefine action for peace, and, as the motto of the congress says, reimagine the world through the prism of a culture of peace.

“Peace is necessary for justice, and we are excited to support this event that promises to set a strong agenda for how we can advance both in the years to come,” said UNI General Secretary Christy Hoffman.

During the three days of the congress, there will be talks and lectures by more than thirty speakers. Featured names include Noam Chomsky, Martin Chungong, Jeremy Corbyn, Beatrice Fihn, Wada Masako, Vandana Shiva and Jody Williams.

Learn more about the programme and how you can register here.