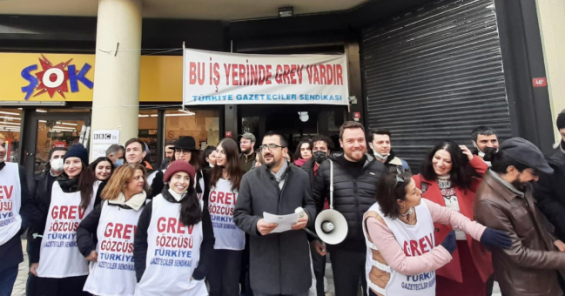 BBC workers in Turkey are celebrating after winning a 32 per cent pay rise, plus other benefits, following a two-week strike.

The workers, who are members of journalists’ union and UNI Global Union affiliate, TGS, braved sub-zero temperatures to picket the broadcaster’s headquarters in Istanbul throughout the work stoppage.

The union has signed a one-year agreement with the BBC that includes an annual pay raise of 32 per cent (contrary to the BBC’s last offer of 10 per cent), as well as extra gains of private health insurance for their families, lunch vouchers and money towards eyeglasses and contact lenses.

It is the first ever strike by workers at BBC Turkey, which came after British media organization refused to give a reasonable pay rise to employees despite the spiralling cost of inflation in the country.

“The BBC Istanbul bureau employees’ success is only a beginning. The motivation and morale given by the strike will encourage colleagues experiencing lack of security, low wages and poor working conditions in the media sector to unite and fight under the union’s roof,” said TGS in a statement.

“The BBC Istanbul strike has shown that international solidarity and support are crucial to winning. UNI Global Union, and our fellow affiliate Bectu in the UK, have given their full backing to TGS at every stage. We are delighted to be affiliated to UNI.”

TGS members at the BBC received solidarity and messages of support across the labour movement and also from other BBC employees around the world.

“We congratulate TGS and BBC workers who stood their ground to achieve this significant victory. BBC Turkey workers have been struggling to make ends meet as their wages have plummeted under the country’s soaring inflation rate. It is only fair that they are compensated fairly and are treated in comparison with other BBC employees around the world.”