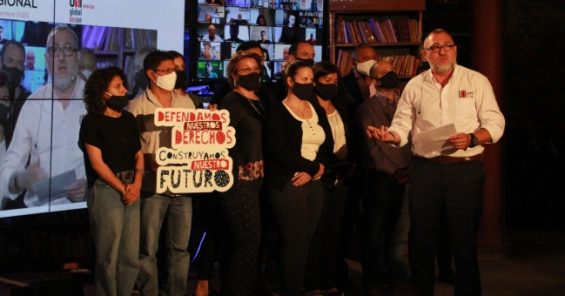 After a powerful first day on organizing and inclusivity, the UNI Americas’ 5th Conference focused on regional integration and the new world of work.

The course for the future was set early in the second day with the election of the region’s leadership, including Marcio Manzone’s re-election as Regional Secretary and election of Hector Daer as UNI Americas President. You can read more here.

“We will do all we can to build unions where there are none yet, and build union power to strengthen workers’ voices,” said Daer.

The discussion, featuring UNI General Secretary Christy Hoffman and Chilean Senator Alejandro Guillier, turned to the need for regional unity in order to overcome common struggles such as the concentration of corporate power, growing inequality, and the rise of the far-right.

“We are 700 people gathered today, united by our shared ambition for dignity on the job and justice for all workers,” General Secretary Hoffman told the conference.

“United because we believe that unions are essential, not only to their members, but also to our communities and society as a whole. United by our shared belief in the power of solidarity, in our knowledge that we are stronger together.”

Former Brazilian President Luiz Inácio Lula da Silva called on the unionists in the conference to put that strength into action. From right-wing populism to fallout from the pandemic, workers face challenges like the 75-year old leader has never seen, but Lula said, “I want to ask you, comrades of UNI Americas, to be the voices for the cry of millions and millions and millions of human beings who work every day.”

Lula said unions should build a world of work that is both more human and more humane. This demand seemed even more important after the conference’s discussion on the new world of work and growing unions in new places.

In addition to workplace organizing, many participants noted the power the trade union movement has had in building political power for working people. In Argentina, in the United States, in Brazil, and beyond, unions are a bulwark against the far-right attacks on human rights.

Ending the conference, a recently re-elected Monzane summed up this need for heightened industrial and political power:

“We are leaving today with a firm commitment to putting the Breaking Through Plan into action, continuing to strengthen our sectors, organizing new workers, and ensuring all workers have the protections of collective bargaining.

“In addition to this, we will work to build unity, to promote a common agenda, to defend democracies, and to end fascism, xenophobia and all forms of discrimination. Let us together build union power in our region.

“I invite all of you and all of your grassroots allies to join us in walking together in an America where we: Defend Our Rights and Build Our Future!”