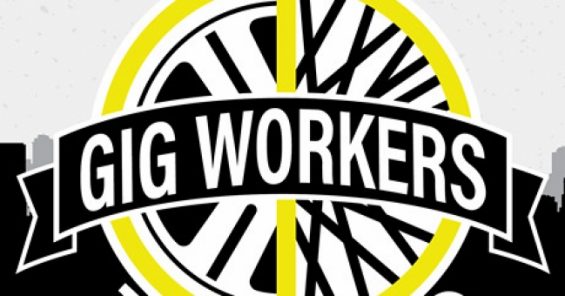 CUPW says the delivery workers in its Gig Workers United campaign have come together to call on employers and legislators to make fundamental changes in an industry where apps control workers’ lives and create unsafe and unlivable conditions.

“The couriers have shown that traditional union organizing is possible in this space. But they’ve gone farther than that, with community-organizing tactics and collective mutual aid. They’ve formed a community local in CUPW – a new kind of local that we’re proud to support because their fresh energy and ideas are what it takes to improve working conditions and reject Silicon Valley’s model of exploitation,” said Jan Simpson, CUPW National President.

The launch of Gig Workers United follows the successes of CUPW’s Justice for Foodora Couriers campaign a year ago, when Foodora delivery workers won the right to join a union and the vast majority voted to join CUPW. Foodora is no longer operating in Canada, so CUPW says the workers have broadened their scope in a new drive to organize delivery workers for all the apps who all work under similar conditions and face many of the same health and financial risks.

“We stand in solidarity with Canadian delivery workers in their demand for rights and dignity on the job. The Justice for Foodora Couriers campaign was a beacon for Canadian app workers that can light the way as they continue to fight for workers’ rights and the right to join a union and collectively bargain,” said Dimitris Theodorakis, acting Head of UNI Post & Logistics.

The delivery workers’ organizing campaign in Canada comes as app-based workers have notched some recent big victories in their fight for their rights on the job. In February, Italy ruled that app-based delivery workers are employees entitled to non-permanent contracts with fixed pay. Additionally, Italian authorities fined Uber eats and other platforms 733 million euros for breach of labour safety rules. Also, in February the UK Supreme Court ruled that Uber drivers are workers under UK law and are entitled to the minimum wage and holiday pay.