Capacity-building on the prevention of violence at work 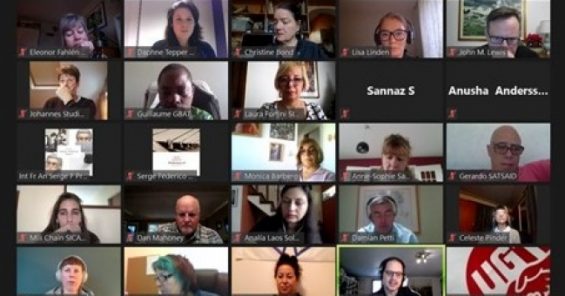 On Monday 14 December 2020 UNI MEI organised an online capacity building session on the prevention of violence and harassment in film & tv production.

Taking place in the context of a project co-funded by the European Commission on ‘Dignity at work’, the 2,5-hour session offered UNI MEI affiliates the opportunity to gain knowledge on the 190 ILO Violence and Harassment Convention and on what trade union can do and ask for to prevent and react to violence in film & tv production workplaces.

Following an introduction by Oliver Liang, Head of the Private and Public Services Sectors Unit at the International Labour Organization, which focused on the 190 Violence Convention and on the recently published ILO Policy Brief on sexual harassment in the entertainment industry; exchanges between UNI MEI affiliates where prompted by presentations of the work done by unions in three EU countries. Karan O’Loughlin, Divisional Organiser, outlined the actions taken in the last years by SIPTU in Ireland while Eleonor Fahlen, Health and Safety Inspector for Teaterförbundet spoke about  the situation in Sweden and Caroline Hemmington, Assistant National Secretary with responsibility for the BBC, presented in details the work done by BECTU in the United Kingdom.

After a first round of discussions, the 40+ participants representing 18 trade unions from 14 countries continued to exchange in smaller groups where they debated real-life study cases.

A trad union guide on the prevention of violence and harassment in film & tv production is currently being finalised by the UNI MEI secretariat and will be share with all affiliates in the first months of 2021.