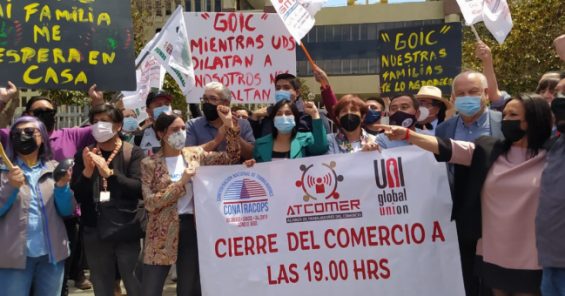 Yesterday, the Chilean Senate Labour Committee approved the bill #CierreALas7, legislation spearheaded by the Chilean Commerce Workers Alliance (ATCOMER). The bill aims to defend decent work and worker safety in the commerce sector by closing stores at 7 pm so that workers, a majority female, are not forced to fear for safety leaving work late at night, and thousands of children do not grow up without absent parents.

“Workers’ have always shown their power on the streets. This bill is viable, this can be done, and we can continue to grow support when more workers take action. We will continue to fight to make this law a reality,” said Claudio Sagardías, President of CONATRACOPS union and spokesperson for the Alliance.

In Chile, women represent 70 per cent of the workforce in the sector, and they are mostly heads of households. For years, large shops in the country closed at 10pm—or even later. Due to the distances involved in commuting and the lack of public transportation, many fall victims of crime on the way to their homes.

Because of the pandemic and curfews, shops have been closing at 7:00 p.m. or earlier, without significantly affecting sales and profits of companies, or workers’ demand for hours. While these have been very difficult times, these changes to hours have reduced the dangers of leaving work late at night, and workers say they were better able to take care of their families.

Senator Alejandro Guillier added, “This approval is a demonstration that these are new times, and new times call for new criteria that must be prioritized today to favour the quality of life of workers and their families, and so that work does not hinder wellbeing and raising children. “

“This major first step came thanks to the vision and leadership of the Commerce Workers Alliance, as well as the solidarity and collective action of more than 150 trade union organizations. Together, we have put the protection of the commerce workers’ health and lives on the national agenda,” said Henry Olivera, UNI Americas Commerce Regional Director.

The bill will move to the broader Senate for a vote.

ATCOMER was created in 2020 to fight for decent, safe and righteous lives for more than 1.5 million commerce workers in Chile. This victory demonstrates once again the importance of union unity and is the first step towards improving the quality of life and safety of women workers.