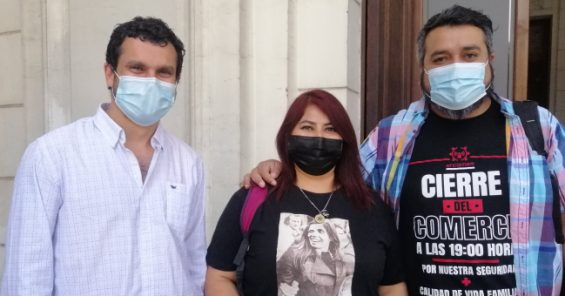 The Chilean coalition Unidad por Trabajo Digno (UTD or United for Dignified Work), which includes UNI Americas affiliates, has proposed enshrining the “Right to Work and Employment Protection” to the country’s Fundamental Rights Commission of the Constitutional Convention. This proposed change to the constitution would ensure dignified, decent and stable work for the people of Chile.

Sergio Pérez, from CONATRACOPS and a member of UTD, explained that the current constitution does not recognize the right to work, but only freedom of work. “This translates into a system in which there is too much freedom to dismiss workers based on grounds related to ‘company needs,’ recognized in Article 161 of the Labour Code,” said the union leader. “For this reason, we need a labour constitution that establishes the “Right to Work” as access to decent and dignified jobs, that recognizes the individual and collective dimension of the person, and an active state that promotes this in its public policies and regulations.”

“The constitutional consecration of the ‘Right to Work’ must generate greater stability in employment, therefore a clause must be included to establish the prohibition or protection against arbitrary dismissal. Likewise, we hope that the New Constitution will recognize the right to Decent Work , following the standard of the International Labour Organization (ILO) ,” he added.

Additionally, Viviana Catalán, CONAGRA leader and UTD representative, explained that even though the current constitution recognizes employment protection, it does not set any protection standard or establish guidelines for state action in its protective role, or a minimum floor of protection to which businesses must adhere: “We hope that the new constitution recognizes employment protection to protect and ensures minimum working conditions, such as health and safety, rest, working hours,  and more,” she said.

The recognition of employment protection requires that the law impose protections to prevent precarious jobs and indecent conditions, according to UTD’s proposal.

For his part, the lawyer and member of UTD, Claudio Aravena, pointed out that “decent and dignified work must respect the principles of the fundamental rights recognized at work, such as freedom of association, union freedom and effective respect for the right to collective bargaining, the elimination of all types of discrimination in relation to employment, among others that are considered fundamental rights at work. ”

The “Unidad por Trabajo Digno (UTD)” group, brings together unions and federations from the service sector, with more than 100,000 members from all over the country, from areas such as retail, supermarkets, private clinics, cash in transit, telecommunications, among others. It is a group that is working to achieve a profound change in the country.

UNI Americas stands with this group and its demands because it is fundamental that this proposal be included in the new Constitution in order to improve the conditions of workers in the country.