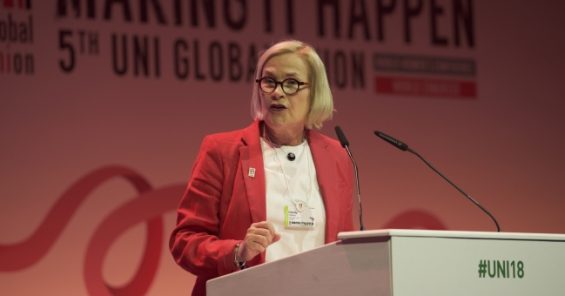 At the opening of the World Women’s Conference in Liverpool, Deputy General Secretary Christy Hoffman told 700 top union delegates from all over the world that sexual harassment was one of the biggest scourges facing our time.

“We’ve all been talking about sexual harassment for a very long time,” said Hoffman. “Over the last 40 years, the issue has surface and then faded from view countless times. But a look at history tells us that big change never happens incrementally – there are always big bursts of forward motion, followed by some steps back.”

“Donald Trump’s disgusting remarks during his election campaign shows how shocking the situation had become. But good things often emerge from bad – from the simmering outrage was action. In January 2017 673 protests, with over 7 million participants took place worldwide. This exploded in to the MeToo campaign and led to women around the world stepping up to take a stand against sexual harassment.”

“This is our time to make big leaps forward for working women all over the world, not just for movie stars. Almost half of women in every country that has been surveyed, have been victims of sexual harassment in their place of work.”

“UNI has been a key player in putting the convention on violence at work at the ILO. Nothing like this has happened so quickly in the recent history of the ILO.  Our governments should all support this convention. “

“How else can we seize the moment?  Well, sisters, we are trade unionists and I believe in the union solution.”

“For all of us involved in collective bargaining, this is the time to put forth our most ambitious demands.  We should negotiate a process with every employer. Every GFA we negotiate should contain a clear sexual harassment policy and discussions have already begun with one employer.”

Hoffman ended her speech with a rallying call , “Sisters, we can make this happen and we must!”