Citibank Korea gets go-ahead to liquidate consumer banking operations, prompting two-thirds of its employees to apply for retirement program 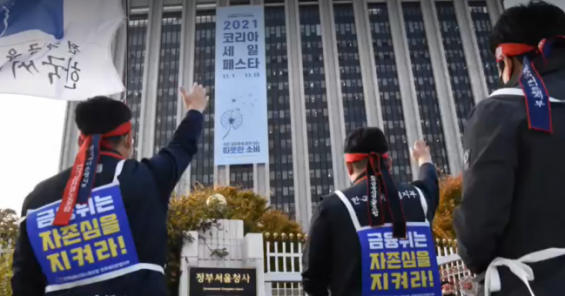 The Korea Citibank Union, member of UNI affiliate, the KFIU, express regrets that more than 2,300 Citibank employees applied for the voluntary retirement program offered by Citibank as it winds down operations in the country.

Since Citigroup announced in April 2021 its withdrawal from the retail banking business across 13 countries in Asia and the Pacific, including Korea, the KFIU-Citibank Korea Workers Union has been struggling against any unilateral sale plan by the management that may negatively impact the 3,500 employees.

The KFIU-Citibank Korea Workers Union took various actions over the past seven months, including appealing to the country’s Finance Services Commission (FSC) to ensure a fair outcome for employees and consumers.

However, a recent announcement made on October 25 by the FSC, saying that it has no accreditation authority over Citibank’s closure plan, effectively signalled the approval for the bank to “liquidate” its consumer finance business.

This development greatly disappointed the union.

Bro Jin Chang-Keun, President of Citibank Korea Workers Union, said, “This decision was disappointing. It clearly shows that the FSC has no interest in safeguarding the future of thousands of Citibank workers who gave many years of services to the bank.

“We had believed that the regulator should ensure a level playing field and that foreign capital investors do not undermine customers and employees’ interests.”

The union believed that the FSC’s position had pushed even more Citibank workers to opt for the voluntary retirement program offered by the bank management.

As of November 11, two-thirds of Citibank Korea’s workforce applied for the program, which far exceeded the expectations of both the union and the bank management.

The UNI Asia and Pacific office noted that under the voluntary retirement program, all regular and contract workers are eligible to apply for it if they have worked for a minimum of three years. Successful applicants are also entitled to an additional one-off start-up/job transfer subsidy of 25 million won (US$20,976).

Rajendra said, “We strongly believed that without the union fighting valiantly for the workers, the Citibank employees may not have obtained a good compensation package as the current one.”

Jayasri added, “UNI Apro will continue to support the union’s fight, now in the next phase, to ensure that the interests of the customers and remaining employees are cushioned from any further negative fallout of the bank’s plan.

A statement endorsing the union’s efforts to hold Citibank Korea to live up to its social responsibility, outlined in the UN Principles for Responsible Investments, will be adopted at the 6th UNI Apro Finance Sector Conference happening today and tomorrow on the 22nd and 23rd November 2021.