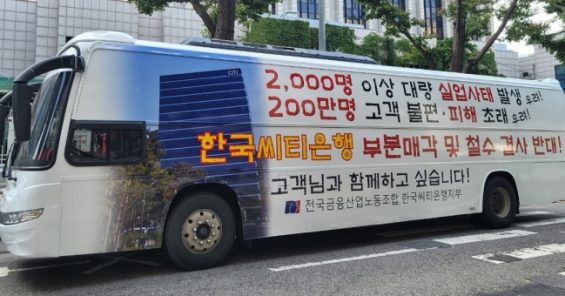 As due diligence on companies expressing interest in acquiring Citibank Korea’s retail business is set to be completed by early August, UNI Global Union affiliate, the Citibank Korea Workers Union, has staged a series of protests against a potential partial or split sell-off that would threaten job security and be detrimental to customers.

Jin Chang-Geun, President of Citibank Korea Workers Union, said, “Our position has been consistently clear. The consumer retail business should be sold in its entirety, provide a voluntary retirement package, and the bank should offer opportunities for employees to remain with Citibank and ensure employment security for those who remain under the new owner.

“If the bank rushed the process, resulting in a split sale, our union will immediately mobilize to enter the final stage of our fight.”

According to media reports, Citigroup is considering a deal that could see London-based Standard Chartered Group take over the consumer banking business in Korea and Southeast Asia as a package.

UNI affiliate, the Korean Financial Industry Union’s (KFIU) President Park Hong-Bae warned that the Financial Services Commission, as the regulatory body approving the sale, should not repeat previous mistakes which saw workers getting the short end of the stick.

Since Citibank Korea Worker Union members voted in early June to take industrial action, they have continued to get their voices heard.  Many members spent much of July picketing Citibank’s national sales and head offices as well as selected government buildings in Seoul during their lunchtimes. They also withdrew from social media chat rooms used for businesses purposes and refused to attend after-hours meetings. 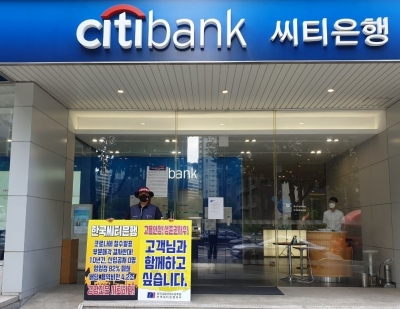 A bus emblazoned with the union’s demands toured a circuit of four significant places three times a day: the Financial Services Commission building, the National Assembly building, the Citibank head office, and its sales office at Munrae building.

As early as mid-June, six lawmakers of the ruling party met with the Citibank Korea Union and the bank management. After the meeting, they released a statement that reflected the union’s key demands of an appropriate and transparent sale process and maintaining employment security.

The UNI Asia and Pacific Regional Office has also sent a solidarity letter to Citibank Korea’s CEO in June. Regional Secretary Rajendra Acharya, noting the recent developments, restated his solidarity with the union, saying, “The union’s demands are entirely reasonable, and we highly appreciate the restraint shown by the management in avoiding any reprisals against union members so far. As long as attention remains on the issue, we are hopeful that a smooth transition can be worked out”.

The Citibank Korea Union has opened an official YouTube Channel to highlight their struggle. They invite all interested affiliates to view the videos (in English) to understand their cause better.