Colombia organized an international forum for life, peace, and democracy 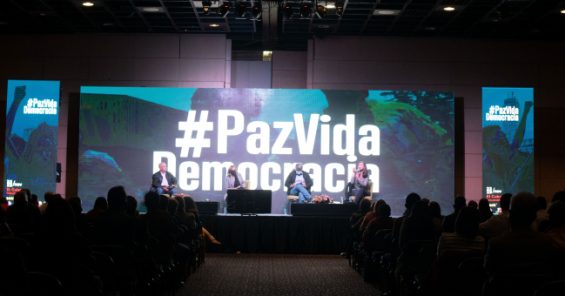 “Without peace, there is no democracy; without the voice of organized unionism, there is no peace: we are the builders of the peace models”, these were the opening words of Bárbara Figueroa, Secretary for Sustainable Development of the Trade Union Confederation of the Americas, at the International Forum for #PeaceLifeDemocracy on November 22 and 23 in Bogotá. The event, organized by UNI and other GUFs, included discussions, together with international panels, about the Colombian reality and the path that needs to be followed to be able to ensure these themes are developed and respected.

Colombia has had opportunities to change the reality that the country has been facing for three decades after signing the Peace Agreements five years ago, a process that brought hope to the Colombians, but that the Government has destroyed. “The Government gives no guarantees to those who signed, and it is making Colombia turn into a genocidal State. Latin America needs to unite so Colombia can be a free and sovereign country, with democratic participation and with a judicial branch that is not manipulated”, stated Adolfo Pérez Esquivel, Nobel Peace Prize. He also referred to the concerning situation of the country, “because democracy is still invisible”, especially in the regions of Cauca, Antioquia, and Nariño, where there are still genocides taking place and there is no response from the Government.

The country has a long history of violence, war, and social repression, but social inequity has drastically increased in Colombia during the pandemic, when the Government gave approximately 40 trillion pesos to the finance sector while stating there were no resources to guarantee a basic income. All of this contributed to produce an unprecedented social outburst in Colombian history, with people going to the streets to demand zero tuition fees, a basic income, and improvements in the health system.

“It is not only because of the crisis that UNI has been constantly following the struggle of the Colombian people. Our goal is to strengthen the union organizations within the Colombian union federations”, said Héctor Dear, President of UNI Americas. “It is necessary for our brothers and sisters to have political options to fight back the hypocrisy of those ruling Colombia. We are here to urge the Government to establish a dialogue with all the sectors, to demand a social dialogue that brings prosperity to all the people”, he concluded.

Rocío Sáenz, SEIU’s Executive Vice President, highlighted the work of the social movement in Colombia and how the world observed the violence that took place during the demonstrations. “The world has its eyes set on Colombia, especially the union movement that wants to guarantee human rights for the Colombian people and to ensure transparency in the elections.”

Regarding the violent acts during the national strike, Gimena Sánchez-Garzoli, Director of the WOLA Andean Program, stated that “the Colombian State did not implement any of the recommendations of the Inter-American Commission on Human Rights, IACHR. After the visit, 25 civil organizations requested a follow-up commission.”

The speakers highlighted the work and the initiatives of the workers’ federations to demonstrate against the pension and labour reforms, the mobilization processes with the active participation of students, and the task that the social movements have ahead of them to change the reality of the country. Additionally, they also stressed the importance of the social and union organizations in their role of improving the quality of life in Colombia, which has decreased while there has been an increase in poverty, in precarious work, and in lack of opportunities.

During the Forum, social, political, and union organizations from the Americas and Europe showed their solidarity with the Colombian people, and they will follow the election process next year. “We know that, as union organizations, we need to support the federations in their role as election observers. As UNI, we will foster, together with our affiliates, their participation in observation missions organized by the Colombian union movement during the coming elections. We will invite all organizations to build together this union observation. You, in Colombia, play an essential role in building the path to the future”, concluded Marcio Monzane, UNI Americas Regional Secretary.