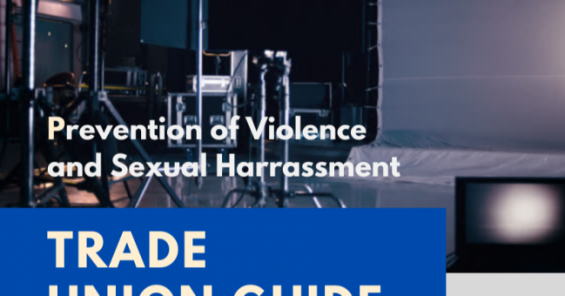 A trade union guide to support the work of member unions preventing and addressing violence and harassment in film & tv production is now available. It has been prepared with the support of affiliates in the context of the project on ‘Dignity at work’ that receives the support of the European Union.

One of the key objectives of this project was to increase the capacity and expertise of trade unions to successfully prevent and address violence and harassment in film and TV production but also to effectively engage in sustainable dialogue with international employers’ federations, funding bodies and regulatory authorities on minimum standards in film and TV production.

The MEI working group on the prevention of violence and harassment in film and TV production met twice in 2019, in Madrid and Brussels, and twice in 2020, once in Berlin and once virtually. Thanks to the information shared during those meetings – state-of-play in the different countries, key demands and needs from unions’ members and representatives, and the good practices identified – the guide could be prepared.

The publication aims at offering unions representing off screen workers in film and tv production across Europe and beyond the necessary knowledge and tools to enhance their action in the field of the prevention and protection from violence and harassment. The guide outlines the general context of this work and underlines the importance of knowing and understanding the law, as well as the responsibility of employers.

The guide also presents examples of actions that can be taken by trade unions (collecting information and monitoring the field, raising awareness and training unions’ reps and members, maintaining hotlines and offering legal advice) or demanded by trade unions (through sector commitments, collective bargaining or the conditioning of public funding).

The UNI MEI trade union guide on violence and harassment in film & tv production is available in English, French and Spanish. You can download it here.