Connecting to Win in Tech 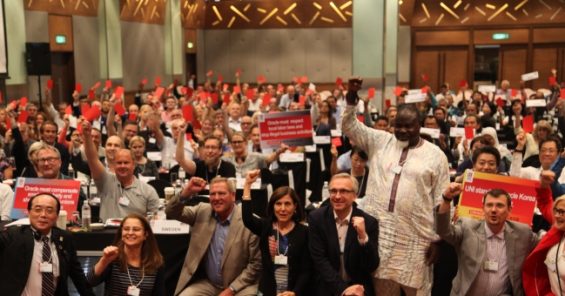 “It’s true that many IT workers were not familiar with unions, but after we spoke with them and listened to their concerns and shared our strategy, they saw the need to organize,” said Florentin Iancu, President of SITT (Sindicatul IT Timisoara). “IT workers are like all other workers. We have problems, and to solve them we need to work collectively.”

SITT’s experience building IT workers’ unions in Romania is not isolated. Tech workers from around the world are uniting to solve a broad range of issues, from extreme hours,  to lack of job security, to transparency and ethics in the deployment of the tech products they produce.

In South Korea, Oracle workers have an ongoing struggle to achieve reasonable working hours, and a first-time pay rise in more than a decade.

“This is a really exciting moment for the ICTS sector because IT and tech workers across the world are realizing the power of a collective voice and collective action,” said Christy Hoffman, General Secretary of UNI. “The energy is tremendous in this sector, and we are hoping these workers channel it into a union. In many cases, they are, and UNI is helping them.”

Video game developers are challenging their industry with calls for unionisation and fair treatment. Game Workers Unite is building a global movement of video game developers, recognizing that their industry and their companies exist all over the world and game workers share many common challenges. Emma Kimena, the international organizer for Game Workers Unite, recognizes the power in building a game workers organization that spans the globe.

“Capital is global and it’s the labour movement’s duty to be just as international,” said Emma Kinema. “It’s our responsibility as labour organizers to bridge the gaps, whatever country and whatever industry.”

“When we started, it was a truly international group. To our very core, we are distributed across the world. I would recommend that people reach out to gamers where they are – and show them solidarity, organizer training, legal help, and guidance. Especially in the first stages of building our movement from nothing.”

“Even if we work in decent places and even if we trust our bosses, all workers deserve and need the dignity they can get when they stand in unity with fellow workers. We should always be struggling for the full value of our labour.”

“It’s a time of innovation in the tech sector and we must reflect that in our approach to organising,” said Teresa Casertano, Head of UNI ICTS. “We have the opportunity now to tackle the issues facing ICTS workers all over the world through collective action and building unions.”