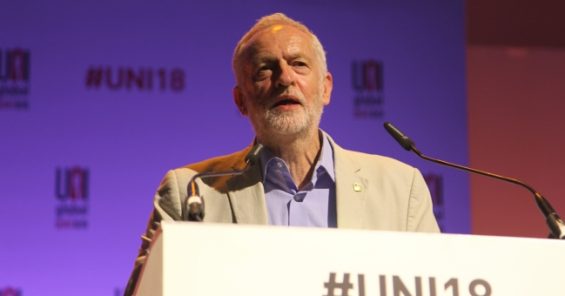 Speaking at the opening of the UNI Global Union World Congress in Liverpool, UK Labour Party leader Jeremy Corbyn roundly rejected the rising tide of nationalism and called on the global union movement to further embrace a vision of progressive internationalism.

“When the global economic system is so clearly only working for the few in both the global North and the global South. More and more people will seek alternatives,” Corbyn said.

“It must be our job as a labour movement to ensure that our socialist values are that alternative for working people across the globe.”

In Britain, Corbyn gave a plan to ensure that “all workers get full rights from day one and to end bogus self-employment whereby companies such as Uber have shirked their responsibilities to their legitimate employees.”

He continued: “These are changes which we want to make in government, but of course, the important thing for trade unionists to remember is that they do not have to wait for the right government to come along.”

“But it is always important to remember that the truly revolutionary changes in history were not handed down from politicians or leaders. They were fought for by people organising together.”

The need for workers to organise across national borders was repeatedly stressed.

Corbyn laid out the four biggest threats to humanity: climate change, the plight of refugees, the excessive use of military force, and stratospheric levels of global inequality.

Philip Jennings, General Secretary of UNI Global Union, said of Corbyn’s speech, “Jeremy’s vision has not only inspired millions in Britain, but many millions more around the world. Today, union leaders heard his message loud and clear and will take his words as a battle cry to fight against corporate greed and inequality.”

“We face huge obstacles today but we are sustained by the power of our unity both in our own trade unions and in the unity of confederations like UNI,” Corbyn concluded. “Our movement is strong because we stand together as one for the many not the few.”