Postal workers across Spain strike against the dismantling of Correos 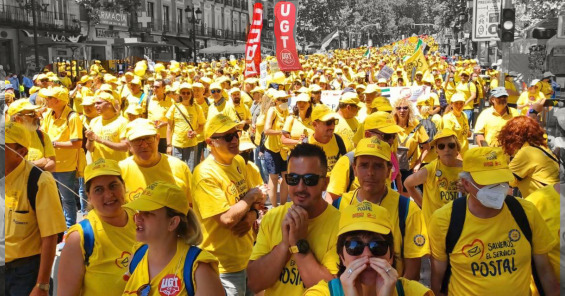 A yellow tide has swept through the streets of Spain. Postal workers of the national postal service Correos have been gathering in their thousands to make their voices heard. Through their unions FSC-CCOO and UGT-SP, they are calling on the government to stop the job hemorrhage at Correos, the country’s largest public company. With these three days of action, they aim to prevent the dismantling of the service and denounce the failure of the new business and management model which has plunged this historical institution into bankruptcy.

The postal service company is faced with the biggest economic deficit in its history. There has been an alarming drop in activity and a cut of 7,000 jobs. The company has now up to 25% of its workforce working part-time, an unprecedented situation in a public company. Correos has registered more than €500 million in losses in three years, €400 million in structural deficit and €1 billion in loans for payroll payments.

Despite the numbers that clearly show a disastrous management, which is bringing a public company with over 300 years history to its knees,  the current president of the Post Office Juan Manuel Serrano, continues to have the backing of the current coalition government. “Open your eyes” is one of the rally cries. With a 95% participation by the workforce, this joint UGT-CCOO call cannot be ignored. The future of the country’s public postal model and of the public operator Correos is of interest to all citizens and must be discussed, agreed and endorsed by society as a whole.

“Without any doubt, the yellow postal tide during these three days of strike and with an impressive demonstration of about 20,000 workers in Madrid, has made a complete amendment to the Correos President´s failed strategic plan. The political cost of the Government with ‘postal issues’ will grow exponentially if it continues to look the other way. It is time to talk about the model of Public Postal Service that the country needs for its citizens and the future that must be guaranteed to the almost 50,000 workers. The mobilisation continues,” said Regino Martín, federal responsible for the postal sector at FSC-CCOO.

“Class-oriented unions are very much alive. The postal sector has shown that workers have joined together to channel the indignation and anger at the dismantling of Correos and the lack of a project, and it is a success of the whole organisation,” said José Manuel Sayagués, Secretary for the Postal Sector of UGT-SP.

The general strike that began during the night shift of 1 of June, paralyzing the large Correos postal centers, has run until 3 June. During the demonstration, workers from the main labour categories of Correos (urban and rural delivery, treatment center agents and office staff) have denounced the deterioration, uncertainty, and job insecurity that now reign at Correos.

UNI Europa strongly supports Correos workers and their unions in their legitimate call for a scrutiny of the way this public company is managed. As trade unions, we will not allow the imposition of models that threaten the world of work in Europe, based on reducing staff costs, cutting jobs and making postal workers’ rights and conditions more precarious as the only viable future for the sector. Models that do not exploit workers, that ensure quality jobs are possible. We defend the public mission of the Spanish post. A public and quality postal model is possible. A postal service is and must continue to be an essential right of citizens for the construction of Europe and the cohesion of society and the territory.

Find here our messages of support:

UNI Global Union Post & Logistics affiliates across the world have been sending messages of solidarity to the Correos workers and their unions.