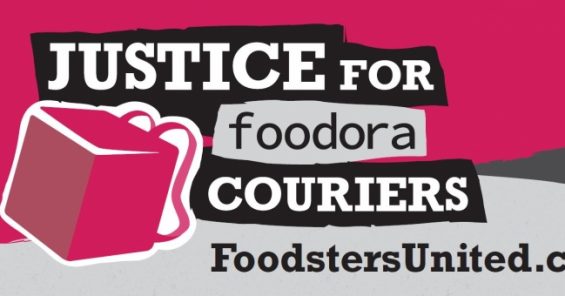 On May Day, Foodora bike and car couriers in Toronto, Canada, announced their plans to unionize with the Canadian Union of Postal Workers (CUPW).

Foodora is an international, app-based company that facilitates online food ordering and delivery. They have operations in 22 countries, deliver for over 36,000 restaurants and employ over 22,00 couriers. Toronto is their largest Canadian market. Foodora charges restaurants 30 percent per order and only pays their couriers $1/km travelled from the restaurant to the customer’s door. The couriers receive $4.50 per order paid directly by the customers.

“What we want is simple and achievable,” says Hunter Sanassian, a bike courier, “We work in some of the most dangerous conditions in the city.  Many of us have been injured on the job.  All we want is to be respected as workers and paid fairly by this profitable company.”

While Foodora controls much of the couriers’ work and administers discipline like any other boss, it classifies couriers as ‘independent contractors’ effectively taking away any legal labour protections including EI, sick days, and guaranteed income.

“Over the last 30 years worker rights have been dismantled, leaving a workforce that is struggling to simply survive,” says Deena Ladd, coordinator at the Toronto Workers Action Centre. “We need to collectively fight back against precarious work such as misclassified and temporary jobs that have saturated the labour market today.”

“As the gig economy grows we are seeing workers who are entirely unprotected,” says Mike Palecek, CUPW National President. “Now is the time to win rights and protections for these workers. The campaign to unionize Foodora couriers will set important precedents for labour rights. Couriers are not machines and they deserve to feel safe and respected at work.”

Toronto couriers are part of a growing number of couriers worldwide who are organizing to gain employment rights. In Finland, couriers recently won the right to have a “break room” to warm up, dry off and use the restroom, in the UK, couriers have participated in strike actions and Uber drivers around the world have begun to organize.

“Today is a day of international worker solidarity, and we are standing with the CUPW and Foodora workers in their fight for better conditions and against precarious employment,” said Cornelia Broos, Head of UNI Post&Logistics. “Their effort to stop the erosion of basic labour protections is an important struggle in Toronto and beyond.”