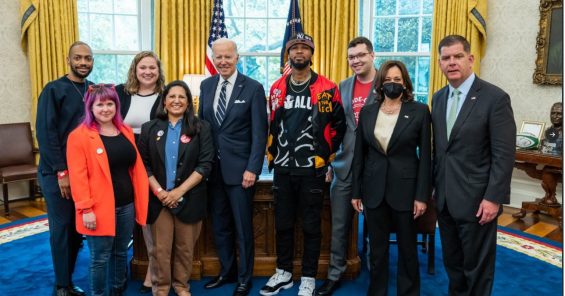 Alex Speidel, who attended the meeting with President Biden, and his co-workers formed United Paizo Workers/CWA in the fall of 2021 in response to the departure of several long-term employees amid allegations of managerial impropriety. In addition, the workers raised concerns about a pattern of inconsistent hiring practices, pay inequity across the company, allegations of verbal abuse from executives and management, and allegations of harassment ignored or covered up by those at the top.

“Game workers organizing is gaining momentum in the US and beyond,” said Ben Parton, Head of UNI Global Union ICTS sector. “This high-level meeting at the White House is proof that when workers are laser-focused on their demands for better jobs, we can be unstoppable.”

“It was very exciting to meet with President Biden, Vice President Harris and Secretary of Labour Walsh today. Being able to discuss CWA’s campaign to organize game and tech workers, and to share the incredible work being done by the United Paizo Workers and our team of freelance writers, was truly an honour, and I’m so glad to have been invited. It is my hope that the administration continues their support of workers who are organizing to join unions in all industries, and that we are able to take this momentum back to CWA to continue the CODE-CWA campaign. Every worker deserves a union!” said Speilder.

CWA’s CODE-CWA project supports workers in the tech and game industries who are organizing for change at their workplaces. CODE-CWA workers at Activision’s Raven Software studio are currently voting in their union election.  Apple retail workers organizing with CODE-CWA’s support will begin voting in the first-ever union recognition election at Apple on June 2.

President Biden has put working people front and centre in his policies. Vice President Harris and Secretary Walsh serve as Chair and Vice-Chair, respectively, of the White House Task Force on Worker Organizing and Empowerment. The Task Force’s mission is to identify actions the Executive Branch can take to support worker power, worker organizing, and collective bargaining.