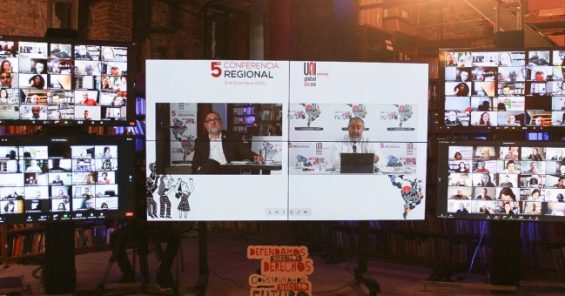 While UNI Americas’ 5th Conference is being held virtually, the agenda set today by the 700 trade unionists from 33 countries participating will have a real-world impact.

During the first day of its quadrennial meeting, the regional body of UNI Global Union outlined a sweeping plan for the next four years—including resolutions on sustainable unionism and green jobs; the creation of decent work for migrants; inclusion as a pillar of building decent work and the defence of human rights.

However, one common theme ran through the day’s proceedings: the foundation for building a more just future in the region rests on stronger unions and expanded collective bargaining. The conference approved the UNI Americas’ Breaking Through Plan to continue supporting innovative organizing and union growth campaigns.

“UNI’s objective is to create union power through worker organizing,” said Marcio Manzone, UNI Americas Regional Secretary. “We must organize, then organize more, and if that is not enough, continue organizing in our sectors and in the multinational companies present in our region.”

Regarding the global crisis and how this impacts workers, he added: “We want to revolutionize how we work in the region. We will fight for the defense of labor human rights and counteract all types of discrimination”.

Monzane held up UNI’s successful organizing centre in Colombia, COE, as an example of the work the region plans to expand in other countries. Hector Daer, the UNI Americas President, noted in his report to the delegates the breadth of the region’s work—partnering with more than 100 unions in every corner of North and South America.

This work could not be more important than in the time of Covid-19.

Maryury Rivero, a Colombian Teleperformance worker, told the gathering how she was fired from the French call centre giant for organizing for basic protections against the virus. But the company’s retaliation has not stopped her. Angered by the injustices of her firing and inspired by the international solidarity of the global alliance of Teleperformance workers, she continues to organize call centre workers.

Alberto Fernández, President of Argentina, told the conference via video that workers throughout the region must have their rights respected to build an equitable new world. He said that workers must get a greater share of the wealth they create, and through unions, they can achieve that goal.

This was echoed on a global level by, Rafael Freire, General Secretary of the Trade Union Confederation of Workers of the Americas. He said, “We want to make a new pact to fight together on a global level.”

“Even though we cannot be together in Fortaleza as planned,” UNI World President Ruben Cortina said, “we are united by our common purpose and our common goals to defend—and advance—the rights of workers throughout the region.”

Day two of the conference will focus on a common agenda and digitalization. Follow the hashtag #BuildOurFuture for to keep up in real time!