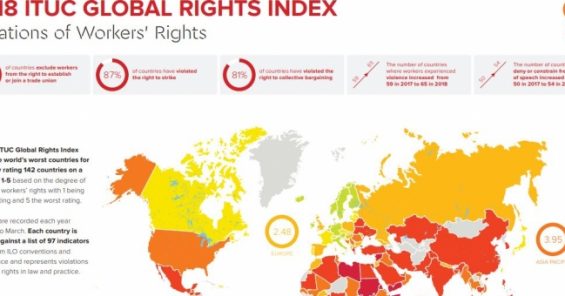 Shrinking democratic space for working people and unchecked corporate greed are on the rise according to the annual ITUC Global Rights Index. The number of countries with arbitrary arrests and detention of workers increased from 44 in 2017 to 59 in 2018, and freedom of speech was constrained in 54 countries.

The report comes on the eve of UNI Global Union’s 5th World Congress in Liverpool where more than 2,000 unionists from more than 110 countries will debate an urgent, progressive platform that puts people and planet over profits.

“Decent work and democratic rights grew weaker in almost all countries, while inequality continued to grow. This was fuelled by the outrageous behaviour of many multinational companies, such as Samsung whose anti-union practices deny workers freedom of association and collective bargaining rights, as shown in internal company documents seized from their offices in Korea. And the corporate power of Amazon continues to grow unchecked, from treating workers like robots to threatening to halt its expansion in Seattle over tax proposals to create affordable housing,” said Burrow.

The ITUC Global Rights Index 2018 ranks 142 countries against 97 internationally recognised indicators to assess where workers’ rights are best protected in law and in practice. The report’s key findings include:

“Attacks on trade unionists are attacks on democracy,” said Philip Jennings, General Secretary of UNI Global Union. “When workers cannot exercise their rights, excessive corporate power poisons our governments and contaminates the social contract. But the labour movement is rising to the challenge of these threats, and through innovation, global solidarity, and organising, we will turn the tide.”

The three global trends for workers’ rights identified in the 2018 Global Rights Index are shrinking democratic space, unchecked corporate influence and the importance of legislation.

“The power of democracy to change the rules was shown with newly elected governments in Iceland, Canada and New Zealand acting in the interests of working people, with laws to close the gender pay gap, provide paid domestic violence leave and increase wages for care workers. The challenge for governments is to govern for people, not for corporate interests, and make laws that respect international labour standards and keep open the democratic space that gives workers a voice in their community and workplaces. Without this we face an insecure and fractured world,” said Burrow.

The 2018 ITUC Global Rights Index rates countries from one to five according to 97 indicators, with an overall score placing countries in rankings of one to five.

1 Sporadic violations of rights: 13 countries including Ireland and Denmark.

2 Repeated violations of rights: 23 countries including France and Estonia.

3 Regular violations of rights: 26 countries including Spain and Macedonia.

4 Systematic violations of rights: 38 countries including Haiti and Kenya.

5 No guarantee of rights: 32 countries including Honduras and Nigeria.

5+ No guarantee of rights due to breakdown of the rule of law: 10 countries including Burundi, Palestine, Syria and Yemen.

The ITUC has been collecting data on violations of workers’ rights to trade union membership and collective bargaining around the world for more than 30 years. This is the fifth year the ITUC has presented its findings through the Global Rights Index, putting a unique and comprehensive spotlight on how government laws and business practices have deteriorated or improved in the last 12 months.