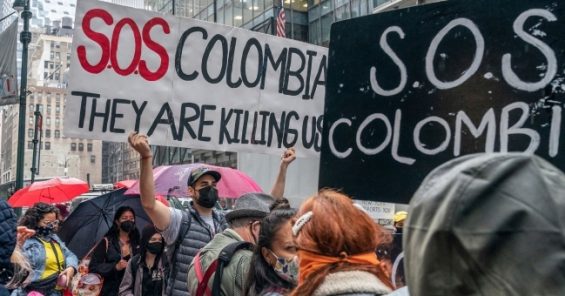 Dozens of international trades unionist and human right activists from Latin America, Canada and the United States are set to arrive in Colombia to monitor legislative elections of March 13.

The international delegation has been coordinated by the global trade union federation UNI Global Union upon invitation from the Central Unitaria de Trabajadores – CUT-, the Confederacion de Trabajadores de Colombia – CTC, and the National Strike Committee, all Colombian organizations concerned with the increase in the number of murders of social leaders in the Andean country.

“Colombians deserve an electoral process that is clean, transparent, and carried out in an environment of peace, freedom and democracy,” said Marcio Monzane, Regional Secretary of UNI Americas. “Our presence is a reminder that the world is watching in order to ensure fair elections.”

Made up of 54 men and 31 women, the group will be certified by the National Electoral Council and will issue bulletins on its observations as needed, regarding the electoral process, risks, alerts and recommendations, according to guidelines set forth by the Colombia organization Electoral Observation Mission (MOE.)

At the end of election day, it will issue a document with conclusions in order to contribute to the strengthening of democracy and the improvement of the electoral system.

A high-level delegation, including Christy Hoffman – General Secretary of UNI Global Union, a representative from the Canadian union Unifor, Marcio Monzane – Regional Secretary of UNI Americas, representatives of the Service Employees International Union – SEIU, which is headquartered in Washington DC, and Brazil’s confederation of finance workers CONTRAF, will also travel to Colombia during the March legislative elections.