Essential, but without vaccines: Brazilian public cleaning workers demand vaccination for the sector 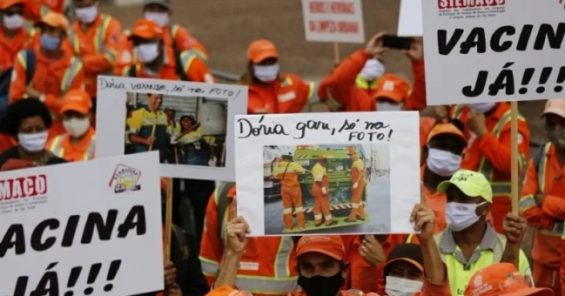 Share via Twitter Share via Facebook Share via LinkedIn Share via Email
Cleaning workers in Brazil, including garbage collectors, held a 24-hour demonstration in the city of São Paulo this week, demanding vaccination for the sector. Getting shots for these vital workers, so far, has not been prioritized during the pandemic.
“The objective is to move the mayor to put the garis in the vaccination line,” expressed Moacyr Pereira, president of Conascon, the Confederação Nacional dos Trabalhadores em Empresas de Prestação de Serviços de Asseio e Conservação, Limpeza Urbana e Áreas Verdes. “Conascon participated in the construction of the National Immunization Plan carried out by the federal government and the vaccination of garis is already planned, but the responsibility for putting workers on the vaccination list falls on the city mayors,” he remarked.
The president of SIEMACO-SP, Edson Andre dos Santos Filho, added, “these workers have been exposed since the beginning of the pandemic and without them the situation would be even more tragic in Brazil.”
The “garis” are those who clean the streets in Brazil’s cities and for the last year-and-a-half, they have been on the front line, keeping their communities sanitary while putting their health at risk. Since the beginning of the health crisis, more than 60 deaths have already been registered in the cleaning sector, with almost 2,000 confirmed cases in the capital alone.
Marvin Largaespada, Regional Director of UNI Americas Property Services said: “Garis are key workers for the health and economy of our societies. As essential workers they should have been prioritized long ago. From UNI Americas, we express our full support to our affiliate Conascon during their struggle for safety.”