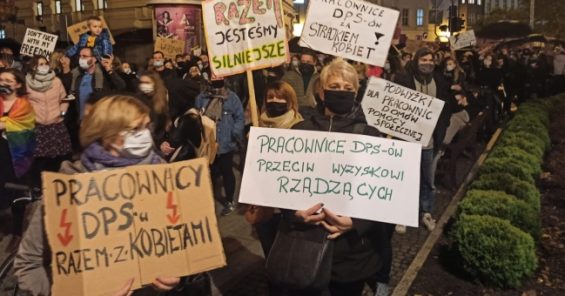 The second wave in Poland is having a devastating effect, with nursing homes heavily hit. In Torun, one of the early hotspots, nursing home workers have taken a stand to protect those most vulnerable to COVID-19.

With under-staffing, shortages of adequate personal protective equipment (PPE), and a lack of overall resources, these long-term care workers said that they were unable to ensure the safety of their elderly residents during the pandemic’s first wave. As a second wave crests, workers, remembering the residents who lost their lives and the workers who have been infected, are organising and winning change.

“These workers are an inspiration. Not only are they carrying their communities through this dark time, but they are also standing up for essential rights. They are shedding light on what has been wilfully concealed: the suppression of conditions of jobs that make and sustain life. They are facing incredibly difficult situations, both materially and emotionally. Their action shows what can be achieved through collective action,” said Oliver Roethig, Regional Secretary of UNI Europa.

UNI Europa together with the central European organising centre, COZZ, supported the workers’ efforts to organise, and by acting together and building collective power in their union, OPZZ Konfederacja Pracy, they brought their issues to decision-makers. They spoke at the women’s protest in the city where participants chanted their support. They then arranged to speak to journalists at the gate of a nursing home to explain their concerns.

In doing so, they were not just taking their demands to their direct employer, but also local government and local politicians, who determine the budget allocated to the nursing home. The first concession they won was a shipment of new personal protective equipment.

The workers welcomed this development but were nonetheless determined to ensure this was not a one-off but rather resulted in sustained support. They managed to establish regular meetings with local decision-makers to jointly identify issues and ways of addressing them together.

This process led to a meaningful recognition of the personal turmoil and risk this period represented for the workers. Firstly, they got a retroactive hazard pay of €2.35 per hour for those who worked with COVID-19 patients over the months of October and November. In addition, all workers in the nursing home are set to receive a hero pay bonus of €180.

“Getting this pay increase I feel more safe, I don’t have to scrape by, borrow money and figure out how I will make ends meet,” said Paulina, a nursing home worker in Torun.

Further improvements sketch out a path to meaningfully lifting up the working and living conditions within the nursing home. Low wages drive high turnover of workers and poor conditions in the sector. In a bid to begin addressing this, the city has increased its budget for nursing homes.

These essential workers are organising in a sector-wide union together with workers in similar positions across the country. Together, they are raising the floor for workers across this essential sector.

“Change is needed across the sector. This case shows that workers must organise but we also need reforms on the national and EU level to keep public money from going to employers that pay poverty wages while putting workers and communities at risk,” said Oliver Roethig.