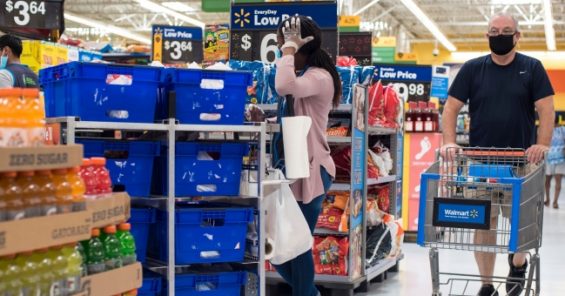 Major retailers such as Walmart, Amazon and Kroger have benefited from soaring profits during the pandemic, but a new report by Brookings shows that with very few exceptions, this has led to modest or negligible gains for retail workers in the US.

Research into 13 of the 20 biggest retailers in America saw profits jump on average an extra US16.9 billion from last year – a 39 per cent increase. However, frontline employees only received a 10 per cent increase to wages that are often too low to meet a family’s basic needs.

Many of the most financially successful companies were the least generous to workers. Amazon and Walmart combined earned an extra $10.9 billion in profit compared to last year, an increase of 53% and 45%, respectively. However, their workers received less than the average COVID-19-related compensation at just US$0.95 per hour and US$0.63 per hour respectively since the pandemic began.

Speaking at an online discussion on the Brookings report, Jeffrey Reid, a grocery worker at Giant in Washington DC, and member of UNI Global Union affiliate UFCW, said: “Although I appreciate it, ‘thank you’ is not enough. I can’t put food on my table or pay rent with thank you.”

“We’re sacrificial now. It’s just not fair. Why not put the money to the people who are making it possible for you to do that? It’s corporate greed,” said Reid who belongs to UFCW Local 400. Giant’s parent company has spent more money on shareholder buybacks than it has on protecting and rewarding frontline workers during the pandemic, said the report’s author Molly Kinder.

“They used the term hero pay, but it’s not there anymore,” said Lisa Harris, a UFCW Local 400 activist and cashier at Kroger’s in Virginia, who was also interviewed for the Brookings report and joined the online panel.

“The fight for hazard pay is a global one – all around the world grocery workers and other essential employees are still not getting the wages they deserve. Food retailers are making record-breaking profits on the backs of their employees and one-off bonuses are not enough. Grocery workers deserve hazard pay during the pandemic and a permanent pay rise reflecting just how important their work is.”

In order to demand wages with dignity, safe workplaces, union representation, and other essential rights for essential workers worldwide, UNI launched a campaign to re-value the work of cleaners, security guards, food retail workers and care providers on the World Day of Decent Work.