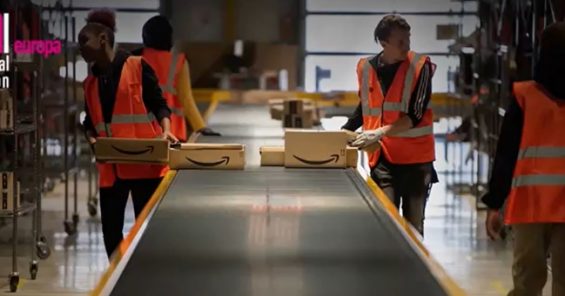 European trade union leaders representing over 12 million workers signed a letter today urging the European Commission to “open an investigation into Amazon’s potentially illegal activities against Amazon workers in Europe.” The effort comes on the heels of the tech giant’s recently exposed spying on workers for lawful union activities in Europe.

“Amazon’s plans to ramp up surveillance of workers across Europe and globally are yet another reminder that EU Institutions should closely investigate Amazon’s business and workplace practices throughout the continent, as we suspect them to be in breach of European labour, data and privacy laws that our citizens expect to enjoy,” the letter reads.

The demand comes as Amazon’s explosive growth has drawn further attention to the company’s notorious anti-union stance globally and as the EU is set to roll out the Digital Services Act, a directive that will regulate multiple aspects of Amazon’s core business and the digital economy broadly. The full coverage of the package is currently being negotiated but it will cover content and user moderation as well as new competition rules for so-called gatekeeper platforms. The European Commission is due to present its plans in December 2020.

“Amazon’ s willingness to spy on workers to undermine their rights provides a glimpse into how deep-seated its anti-union ideology is,” said Christy Hoffman, General Secretary of UNI Global Union.  “These anti-union schemes are only what has been made public. We have heard from workers about the fear of speaking up on the job, and we have seen the retaliation against union supporters. But it is encouraging that despite the company’s dirty tricks, Amazon workers worldwide continue to stand for their rights. We are proud to stand alongside them.”

“The revelations have been accumulating over the past weeks: the corporation led by the richest person in the world is spying on some of the lowest paid workers in the EU. Amazon has led the raid on workers’ rights, using its data-monopoly power to crush efforts by workers to improve their conditions. Now it is ramping up its espionage operations. Its abuses call for special attention. It is time for the EU to act,” said Oliver Roethig Regional Secretary of UNI Europa.

Representing more than 20 million workers in 150 countries—including 7 million workers in Europe—UNI Global Union and its regional office UNI Europa are driven by the responsibility to ensure skills and service jobs are decent jobs and that workers’ rights are protected, including the right of union representation and collective bargaining.