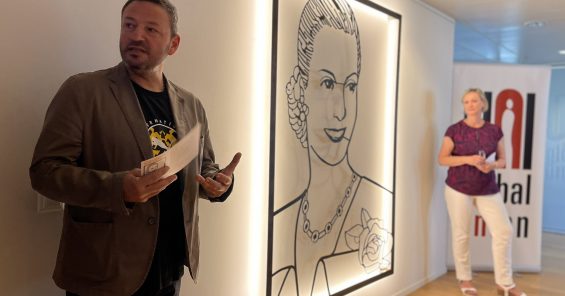 This week UNI Global Union was honoured to receive a stunning mural of ‘Evita’ by celebrated Argentinian artist, Alejandro Marmo, in recognition of UNI’s work to build power for women workers worldwide.

The two-meter-high artwork of Argentinian icon Eva Peron – who defended workers’ rights and led the drive for universal suffrage in Argentina – has been donated by Marmo’s ‘Art in the Factory’ foundation. The artist joined UNI Global Union staff for the installation of the piece at UNI’s headquarters in Nyon, Switzerland, on 30 May.

The mural is a sister work to the towering Evita silhouettes that grace the North and South facing facades of the Ministry of Social Development on 9 de Julio Avenue – a main street in the Argentinian capital Buenos Aires.

Marmo believes that Evita’s cultural legacy in fighting for women’s rights and championing the poor transcends politics: “Evita set a course in the defense of gender issues, albeit within the limitations of her time, but she was a symbol. She was the woman who left that struggle impregnated in the hearts of the people.”

It’s why the artwork is an appropriate gift for UNI, says Marmo, which today fights for the rights for women and men workers around the world: “It’s not my work that is going to be inaugurated at the UNI headquarters, but it’s your work: the work of women. I think the artwork is already done by you. Not because you have made the piece to be installed, but because your work is what gives it value and meaning.”

“We are delighted to have been given this magnificent mural of Evita, who is the embodiment of the struggle for women’s rights and equality. Our thanks go to Alejandro and his foundation for this generous donation on behalf of all our members.”

Alejandro Marmo specializes in producing art made from scrap metal in collaboration with people excluded from society. It was his work with the marginalized in Buenos Aires led to his friendship with the Pope. Marmo’s two sculptures ‘Christ as a Worker’ and ‘Our Lady of Lujan’, made from recycled materials with the help of youths with drug problems, are exhibited in the Museums of the Vatican.

His most recent series called ‘El Abrazo’, can be found in public areas across Argentina and Latin America, as well as in cities Tokyo, Rome, Milan, Vienna, Madrid and Barcelona.