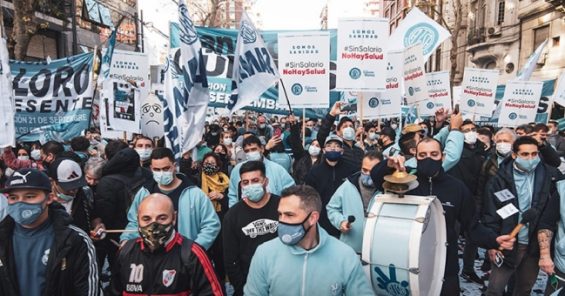 On the eve of a planned national strike and mobilization, the Federation of Associations of Argentine Health Workers (FATSA) won a 45% pay rise for the sector–protecting the purchasing power of its members.

“This success is not only about the agreement itself but also the unity we enjoyed throughout this period,” said Carlos West Ocampo, FATSA’s General Secretary. “There has never been such a level of togetherness across the country as there was in this struggle.” And it is “thanks to the campaign that an increasing number of colleagues have got involved in the union for the first time.”

The agreement involves a series of pay rises: 15% in July; 15% in September; 10% in November and 5% in February, at which point their will be a review.

“Health workers are celebrating today. We can enjoy our victory, we can feel good about it, we can hug each other and party. We are proud to belong to a union that has the belief, firmness and solidarity necessary to achieve our objectives,” said Héctor Dáer, FATSA’s Assistant General Secretary and President of UNI Americas.

“Victories are always collective. My eternal gratitude to all the colleagues who joined us and made their presence felt in the streets and at each workplace. This is a victory for all of us,” he concluded.

UNI Americas and its affiliates, especially in the healthcare sector, which showed its solidarity from the start of the dispute, celebrate this collective victory won by trade union struggle and unity.

“This is a victory of global significance for the Healthcare sector, so I can only congratulate FATSA and its affiliates”, said Adrian Durtschi, Global Head of UNICARE. “Essential workers, like those in the health care sector, need better pay and working conditions. UNICARE and FATSA will continue to fight everywhere to achieve this throughout the world.”