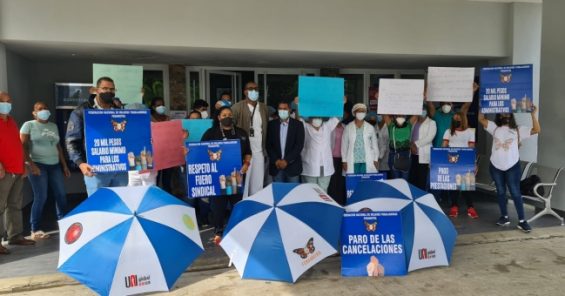 Holding signs and in full compliance, FENAMUTRA, together with other union organizations in the health sector, carried out a strike in the main cities of the Dominican Republic. The unions demanded salary increases, respect for union rights, decent pensions, among other. The Federation also continues to demand that the government put an end to mass layoffs.

This union action was decided after the government’s resolution to give a 30% salary increase, without considering the other half of hospital workers who perform administrative, maintenance and other professional tasks of utmost importance for the facilities. The proposal that was presented more than four months ago to the Health Ministry Cabinet, headed by Vice President Raquel Peña, and the promise of President Luis Abinader that all health workers would have the same benefits, have been totally ignored.

Therefore, the National Health Coordinator ( CONASALUD), and the Dominican Federation of Technical Professionals and Health Workers (FEDOSALUD), made a joint statement to the public when the Eastern region strike finished, stating that “We await the government’s response to our demands, and we will continue in unity and will not stop until the promises of the President of the Republic that equal treatment will be given to all workers of the Health sector are fulfilled”.

Both organizations announced that the agenda and calendar for the union fight will be evaluated, and will continue after the National Assembly if the authorities do not set a date for the signing of the agreement, as promised in the meeting that was held between both parties yesterday. Ruth Díaz, president of FENAMUTRA, declared to the press: “We are requesting a 100% pension, we do not accept being summoned to say that more than 50% of the health workers will be left out.”

“We do not understand the denial and sectarianism favouring one group over another. We are demanding that the government comply with the ten items that we presented at the National Palace,” she concluded.

Alan Sable, Regional Director of UNICARE Americas, added: “It is unacceptable that all health workers are not recognized equally. We all know that without administrative workers, without nurses or cleaners, without maintenance personnel, the health system would collapse. We call on the government in the Dominican Republic to reconsider this decision and consider all health workers without discrimination. “