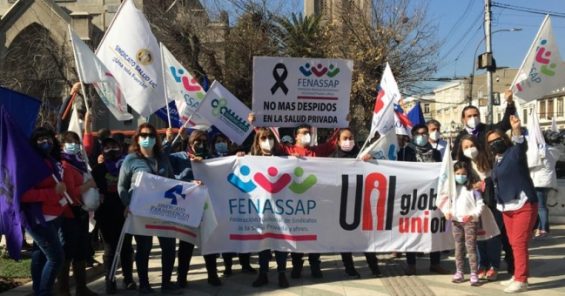 Yesterday, Fenassap, affiliated with UNI Americas, and representatives of private health workers, participated and demonstrated outside Congress, claiming the government’s mismanagement in controlling the pandemic and lack of transparency in decision making without listening to the voice of health workers.

Health unions supported the call for Chile’s Minister of Health, Enrique Paris, to be questioned in the Congress of the Republic. The call was launched by the Central Unitaria de Trabajadores (Central Confederation of Workers), in particular the health sector. The union organizations that supported the call stated that “workers were abandoned” and expressed great concern that “one out of every three workers has mental problems”.

They also stressed that the sole objective of the measures implemented by the government is to reactivate the economy, with no focus on health. Also, that the workload continues to increase and there is no monitoring of new variants. There is no joint strategy being developed, but rather choosing economic recovery over people’s lives and health. During the questioning in Congress, the minister promised to pay a Covid Bonus to 223,000 health workers.

Adrian Durtschi, Head of UNICARE, said: “The government must listen to the workers because they are the ones who have been at the forefront of this unprecedented pandemic from the beginning, and are who suffer the consequences of the lack of adequate responses.”

“Covid-19 cases may be decreasing, but health workers continue to need protection and psychological support, along with respect and guarantees of their rights. We cannot accept that many private clinics continue to lay off workers in the midst of the pandemic. We call on Piñera’s administration to listen to the union organizations, because this crisis is not over,” he concluded.