Fighting for a guaranteed basic income in Colombia! 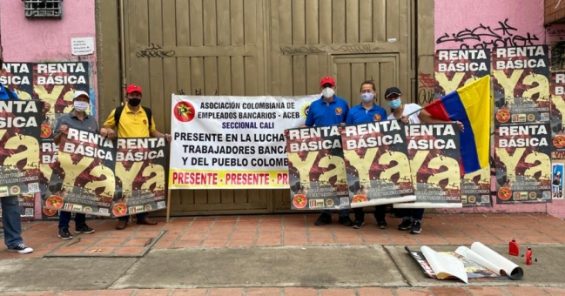 The Colombian Association of Bank Employees (known by its Spanish acronym ACEB ), with the support of UNI, has launched the “#RentaBásicaYa” campaign in Colombia. The campaign’s goal is to establish the right of all people to live with dignity through basic income, among other economic rights, and the drive focuses on gender equality as a mechanism for addressing the impacts of the Covid-19 crisis.

By putting up banners on major roads and in banking areas throughout the country, ACEB has been calling on the government of Iván Duque to restructure the Basic Emergency Income. Union activists have also been holding talks inside banks and distributing flyers to bank workers and clients. Last week, the technical-academic report on the topic, “Renta básica: viabilidad y utilidad” (Basic income: viability and usefulness), was published and found a big audience. Other campaign activities include a podcast with several episodes discussing the different basic income proposals and their sources of financing. The union talks about the need for contributions from feminist economists to advance this discussion, as it is not enough to only have the regulatory framework of basic income, action is also needed. You can listen to the episodes here.

Additionally, ACEB has been producing videos and interviews with elected members of the House, who have submitted to Congress the request for Basic Income NOW! All these actions together have reached thousands of people throughout the country.

“The fact is that Colombia has been dragging an economic crisis for more than a decade, and which has been aggravated by the pandemic. This situation has of course brought about an increase in the hardships of broad layers and sectors of society, such as outsourced workers, the unemployed, the mothers who are heads of households, and peasants who have suffered greatly from more than 30 years of neoliberal policies. Basic income is a political decision of social justice,” said Alberto Carreño, of the Comunes Party.

“We need respect for the people who have lost their jobs, but also for vulnerable places, everyone needs to eat in this country, but especially those sectors affected by the pandemic, who earn their daily living. They need to eat, that is why we need the basic income. It cannot be that the money goes to the richest sectors in Colombia,” said Aída Esquivel, Unión Patriótica.

This campaign is in concert with the demands of the country’s central trade union bodies and other social movements, and all are demanding the current government to give a response. In March, a new basic income project was presented, where approximately 7.4 million households would receive a monthly contributions ranging from $ 320,000 to $ 470,000 pesos.

The context of the National Strike

Since last April 28, the Colombian people have been in the streets nationwide confronting official policies. Winning the cancelation of the Tax Reform that sought to impose new taxes for the most disadvantaged populations, and forcing the Minister of Finance, Alberto Carrasquilla, to resign from his position.

“The people have not been intimidated and continue to fight against hunger, unemployment, the crisis of health services, and demand to negotiate the emergency document presented by the Comando Nacional Unitario (Unified National Command) and for the approval of the Basic Income Now without further delay. This will not only save the lives of the millions of Colombians who are dying of hunger, but it will also serve to reactivate the very deteriorated Colombian economy through consumption,” stated Francisco Sánchez, president of ACEB.

According to a report delivered by the National Department of Statistics (DANE, in Spanish), an entity under the direct supervision of the President of the Republic, the gross domestic product (GDP) in the country fell by 6.9%. The report also shows that extreme poverty encompasses 15.1% of the population, that is, 7.4 million people, of which 2.78 million entered extreme poverty in 2020. The monetary poverty rate is 42.5%, which means that 21.2 million Colombians are in this segment. The report indicates that there were 17.4 million people registered in 2019, rising to 21.2 million in 2020, with a total result of  3.6 million people living in the line of poverty today. In this matter, Colombia ranked above the average for Latin America even before the pandemic.

Basic income is protected by the duty imposed by the 1991 Constitution on the State to protect the fundamental rights of citizens in conditions of poverty.

“The transformative and effective solution for the reality of this country is the right to a #RentaBásicaYa (Basic Income Now) that guarantees the survival, minimum living conditions and dignity of the people most affected by this pandemic,” concluded Sánchez.