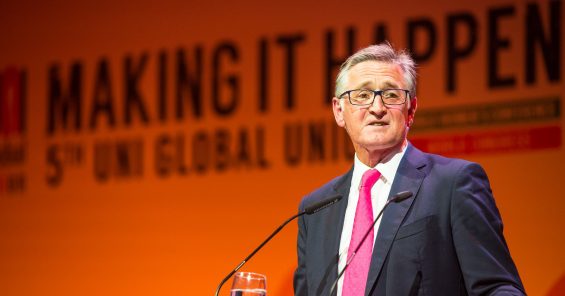 Former UNI Global Union General Secretary Philip Jennings has been nominated for the “Personality of the Decade” award by the Nyon-based La Côte newspaper.

Having won the paper’s “Personality of the Year” in 2013, Jennings joins a select shortlist of 11 in contention for the award, which honours the achievements, work and life of people living and working in Bassin Lémanique, the region that includes UNI’s head office in Nyon.

Jennings, who led UNI for 18 years as General Secretary, built the organization into a powerhouse for workers’ right and has been a lifelong champion for peace and working people the world over.

Over a long and distinguished career dedicated to strengthening trade union power, Jennings became known as a global warrior for workers’ rights, peace and justice.

“It is an honour to be nominated for such an award,” said Jennings. “With people from all over the world, La Côte is an international region, and I do not think we would have been able to make such a global impact without being rooted in such a vibrant, welcoming community.”

After retiring as UNI General Secretary at the Liverpool World Congress in 2018, Jennings has been busy – becoming a powerful advocate for peace as the Co-President of the International Peace Bureau, pushing for human rights in sport as the Director of the Centre for Sports and Human Rights and a voice for workers as member of the ILO Global Commission on the Future of Work.

“Philip has always been proud of UNI’s history in the La Côte region and his own connection to the community,” said UNI General Secretary Christy Hoffman.

“Although as a global organization, our members come from every continent of the world, we see ourselves as part of the La Côte region in every sense and we are immensely proud to call Nyon home.”