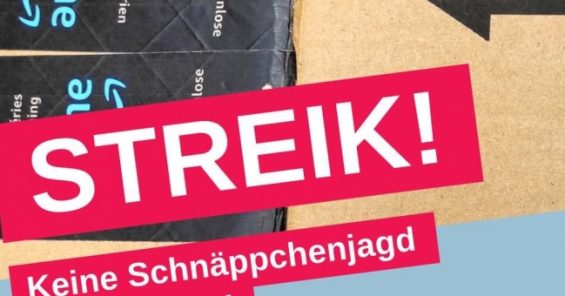 As Amazon faces intense scrutiny from EU lawmakers, unions and the public over spying of labour activists, its workers in Germany—members of the union ver.di—are responding with a strike on Prime Day in the cities of Leipzig, Bad Hersfeld, Rheinberg, Werne, Graben and Koblenz in what´s long-running struggle for better pay, working conditions and respect. ver.di members struck over the summer after workers in Amazon’s German warehouses contracted the virus.

“Amazon workers in Germany and everywhere are fighting for better pay and decent working condition, but they also expect to keep their constitutional rights intact and have private conversations without Big Brother watching over as they organize online,” said Christy Hoffman General Secretary of UNI Global Union. “Amazon has failed to ensure workers’ safety, and we fear that influx of orders and the gruelling Prime Day pace will make a bad situation even worse.”

In addition to shopfloor demands over pay, safety and  union representation, ver.di also criticized recent revelations about spying of Amazon workers and attempts to keep unions out of the factories using secret service methods. “It is unacceptable for a company to flout the law,” said the Orhan Akman, ver.di national specialist for the retail and mail-order sector.

Shortly after VICE broke news with a internal memo from Amazon, trade unions from 15 European countries, including ver.di, have demanded that the EU Commission launch an investigation into the possible illegal activities of Amazon against employees of this company in Europe. European lawmakers also joined the effort with 37 members of the European Parliament (MEPs) submitting a letter to the company’s CEO Jeff Bezos calling for urgent action, days after European labour unions urged EU authorities to investigate the company for what they consider a “breach of European labour, data and privacy laws.”