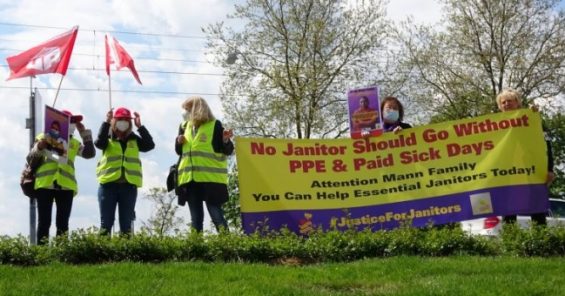 This week, the Houston janitors fighting to keep their union jobs at Pennzoil Place, one of the most iconic skyscrapers in the oil and gas capital of the world, are gaining a key endorsement from their German counterparts.

“We live and work thousands of kilometers apart, but the problems that we encounter in our everyday work are often the same. As a sister union in Germany, we support the cleaning workers in Houston,” says Ulrike Laux, a member of the IG BAU national board.

“Every worker needs appropriate protective equipment and paid sick leave. That is why we call on the Mann company to abide by the law, statutes, and collective bargaining agreements, also in Houston and around the world, “said Ulrike Laux, member of the IG BAU national board.

The members of the German union IG BAU are taking this fight as their own by holding demonstrations in support of the SEIU Texas janitors outside the Mann Immobilien GmbH building in the city of Karlsruhe.

According to IG BAU, the Mann family, based in Karlsruhe, has significant influence over one of the companies that own Pennzoil Place. Last year, the janitors at Pennzoil Place had a collective agreement that guaranteed them paid sick leave but the company that owns the building decide to replace their employer with non-union contracts that threaten their livelihoods

After being there for so long, it’s strange to have to leave,” Elizabeth Orellana, who has cleaned Pennzoil Place for more than 25 years told the Houston Chronicle. She was told she will not be able to stay in the same job.

“From Houston to Karlsruhe, essential workers are demanding dignity and respect for those who keep Pennzoil Place running,” said Eddy Stam, Head of UNI Property Services. “The Pennzoil Place janitors have our solidarity and support to continue fighting for decent pay and union representation.”