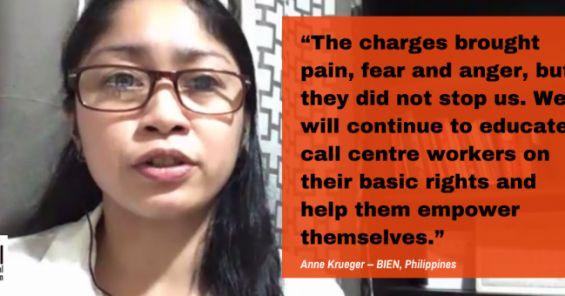 For years, the Philippines has been one of the most dangerous countries for trade unionists, and the situation has only worsened since the Duterte administration came to power in 2015.

The Council of Global Unions (CGU) confirms that 46 unionists have been murdered by extra-judicial killings for their trade union work since Duterte assumed the presidency. Additionally, trade unions are threatened by anti-union discrimination and violence, as well as red-tagging and the criminalization of their leaders and activists.

On Monday, the global trade union movement held an online rally to hear first-hand accounts from Philippine labour leaders targeted by the government’s Anti-Terrorism Act. The law, enacted in July, gave the country’s national security apparatus sweeping powers to the criminalize trade union activities—often under the false pretext of terrorism.

Anne Krueger, an organizer with contact centre worker association BIEN in the city of Bacolod, spoke during the virtual event about how she has been attacked under this act. Krueger’s home, which she shares with her partner and five small children, was raided in October 2019. Police imprisoned her after planting weapons and wrongly accused Krueger of being part of an armed rebel group.

While she is out of jail now, the charges—and the threat of others—still loom over Krueger and labour organizers throughout the country.

“The charges brought pain fear and anger to our friends, families, and organizations, but they did not stop us,” she told the virtual crowd. “We will continue to educate call centre workers on their basic rights, to move them to action and help them empower themselves.”

As part of the CGU, UNI will continue to stand with Anne Krueger, BIEN, and the Philippine labour movement.

Rajendra Acharya, Regional Secretary of UNI Asia & Pacific, said, “Trade unionists in the Philippines are demanding justice in some of the most difficult situations in the world. Even though they face repression and state-sponsored violence, but they keep pushing and keep organizing. We will stand with them, in solidarity, to help ensure their safety and their victory.”

This sentiment was shared by Sue Longley, General Secretary of the IUF, who told participants, “The CGU is fully committed to upholding union rights and human rights in the Philippines. Activism is not terrorism, and trade unionism is not a crime.”

As part of that solidarity, the ITUC will be organizing a global day of action for the Philippines on 30 November. To find out how you can participate, sign up here: https://www.ituc-csi.org/global-solidarity-philippines.