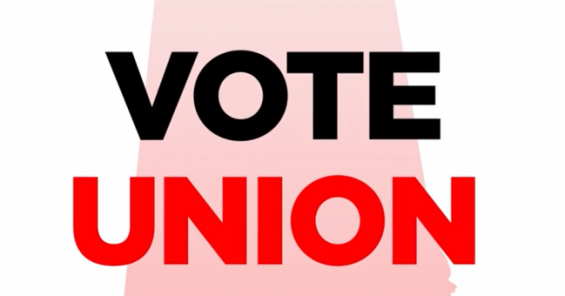 The global labour movement is coming together to show solidarity with Alabama warehouse workers and their high-stakes campaign to form the first Amazon union on U.S. soil.

Share this inspiring video to get the word out on social media. Our #BAmazonUnion friends need to know that we have their back in their fight against one of the most anti-union corporations out there.

“The solution to Amazon’s very brutal way of conducting business is just as old as union-busting itself: stand up to the boss, organizing for power, and the determination to defy the odds,” said Christy Hoffman General Secretary of UNI Global Union. “This is what Amazon workers are doing now in Bessemer, Alabama, and what workers have been doing for years in places like Leipzig, El Prat, Vigonza, and around the world.“

She continued, “The BAmazons have inspired their fellow workers in the United States and are a force of change at the company globally.”

The excitement generated by the Bessemer workers campaign to join RWDSU has prompted support and solidarity from athletes, movie stars, musicians, and even U.S. President Joe Biden.

In the financial world, and with the help of UNI Global Union, over 70 investment firms and institutional investors representing combined assets of more than US$6 trillion, submitted a letter to Amazon in February demanding that the tech giant cease “all anti-union communications, including public statements, captive audience meetings, texts, websites, on-site billboards, and any other form of contact with workers regarding their freedom of association.”

In the letter, the investors also demanded more transparency regarding “activities and efforts by Amazon to assure its employees of their ‘right to join, form, or not to join a labour union or other lawful organization of their own selection, without fear of reprisal, intimidation, or harassment.”

This massive—and growing—level of support can be explained because Amazon, like many other American corporations, is resisting unionization with anti-worker campaign, full of dirty tricks like anti-union propaganda and persuasive anti-union videos. The company has even rolled out intimidating captive audience meetings, where a supervisor or a “union-avoidance consultant” pushes the boundaries of the law, and the truth.

But this video, and the solidarity behind it, shows that world is watching. For many of these workers, this election, alongside the recent U.S. presidential election, ranks as one of the most important votes of their lives. It should be free and fair.